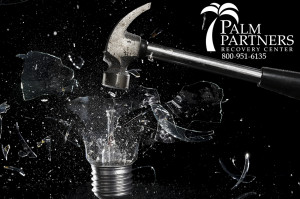 I’ve heard it said that getting clean and sober is the easy part – staying clean and sober is what takes work. And this is pretty much true. I’m not saying that it wasn’t difficult to take that initial plunge because I acknowledge that that was hard, too (it took me about 10 years to even attempt it). But, once the drugs are out of your system, staying that way – drug-free – means upkeep and maintenance. And that spells W-O-R-K.

A great way to laying a sturdy foundation for your recovery is to recognize and then destroy any old beliefs you night be holding onto. Here are 9 delusions that need to be SHATTERED in order to stay clean and sober.

Maybe at first but, think really hard. I mean really hard. And be willing to be honest with yourself. At the end of it all, were you really having fun? All that lying, scheming, cheating, scrounging, and then add feeling sick, guilty, depressed, and anxious on top of all of that…I’d say you weren’t enjoying it one bit. I’d even put money on it.

This was one of my main delusions when I was in active addiction. I had a very strong, negative reaction to alcohol and so I never drank. But, I felt that it was only fair that I got to do drugs since I couldn’t drink. I’d go around thinking – and even saying to others – that everybody deserves a vice and, doing drugs is mine. That’s how I’d justify it to myself and others.

After we get clean and sober and especially after we put some distance and time between us and the last time we used, we start to think that we can do it, just once. The problem with that is…we can never do it just once. For some of us, we might be able to drink or use something just once – at first. But, inevitably, we are right back where we were, or worse. When you start thinking you can use again, think about why it is that you even want to use. Then remind yourself that it’s your disease talking to you – in your own voice. That’s how tricky it is. Addiction will tell us we’re OK and have us believe that we’re OK, by talking to us in our own voice.

4.)    I’m not hurting anyone else but myself and I have that right

This was another one of my favorite self-delusions. By the end of my active use, I was so depressed and basically just wanted to die. I saw using drugs as a means to an end. And I would tell myself over and over that I’m making the decision to put drugs in my body and that it was my right to do so. As they say, addiction is a selfish disease and I wasn’t even able to see how I was hurting so many other people than just myself.

After getting the junk out of your system, you may start to think that you’ve zeroed out the scales and that you can go back to drinking and/or drugging but now you can actually control it, knowing what you now know. False. Being an alcoholic/addict means that there is something different about you, that sets you apart from people that can drink and even use drugs on occasion. Addiction is a medically recognized condition and there is even genetic evidence of this. As it stands now, there is no cure for addiction but it is possible to stop it in its tracks. But you have to be willing to let go of your old myths and ideas about it in order to be successful.

Just like I said for #2, this was another go-to of mine when it came to justifying my drug use. I would tell myself – and had even convinced myself – that I was just “partying” and that my drug use was no different from that of recreational users. Now looking back, the truth was that I definitely used differently than my “normies” friends.

7.)    I might have had a problem, but I’m different from other alcoholic/addicts

In that, “I’m not an addict.” To that, I say, no one goes to rehab accidentally or because they want a vacation. If they needed a vacation, they would book a real one. Besides, I’m sure you can find a decent getaway for a lot less than what going to treatment costs.

A lot of people seem to think that, because ‘only’ alcohol was their problem (they could do coke from time to time) or things only got bad when they graduated to heroin – these are just examples of course – that it’s that one substance that’s the root of their problem. I work in treatment and I see it all the time…clients returning for treatment because the last time they were here, it was for one thing. When they completed the program, they were still under the impression that it was that one substance that they had a problem with and they convinced themselves they could use other drugs successfully, as long as they stayed away from that other thing, the “problem drug.”

Addiction is a disease of perception. It involves distorted thinking that has the ability to trick us into believing we are clear-minded and thinking logically when we decide to pick up a drink or drug. In reality, addiction really has nothing to do with substances. The substances are an external – and temporary – “solution” for us that eventually stop working and just make things worse. Way worse.

Unfortunately, it is quite common for someone to die from a drug overdose on a relapse and often times it’s the first time they use since getting clean. It’s true that this is mostly due to tolerance, or lack thereof, however, you’d be a fool to think that you are somehow invincible. There are many factors involved in overdose, other than tolerance level, and you are just as likely to overdose and die as the next person is.