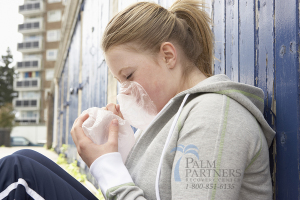 Inhalation, which most commonly referred to as huffing, sniffing, dusting or bagging generally occurs through when someone ingests toxic fumes in through the nose or mouth. Inhaling hazard chemicals makes it so toxins are rapidly absorbed through the lungs into the bloodstream, then they are quickly distributed to the brain and other organs.

People who abuse inhalants typical experience intoxication, with symptoms similar to those produced by drinking alcohol within a matter of minutes. The draw back to that with inhalants is that the intoxication lasts only a few minutes, so some users prolong the “high” by continuing to inhale repeatedly, putting their bodies through more damage. There are a few primary methods used for inhalant abuse, which include:

Huffing- is when a chemically soaked rag is held to the face or stuffed in the mouth and the substance is inhaled.

Sniffing- can be done directly from containers, plastic bags, clothing or rags saturated with a substance or from the product directly.

Bagging- substances are sprayed or deposited into a plastic or paper bag and the vapors are inhaled. This method can result in suffocation because a bag is placed over the individual’s head, cutting off the supply of oxygen.

Other methods used include placing inhalants on sleeves, collars, or other items of clothing that are sniffed over a period of time. Fumes are discharged into soda cans and inhaled from the can or balloons are filled with nitrous oxide and the vapors are inhaled. Heating volatile substances and inhaling the vapors emitted is another form of inhalation. All of these methods are potentially harmful or deadly. Experts estimate that there are several hundred deaths each year from Inhalant Abuse, although under-reporting is still a problem.

After an extensive 2 years of public dialog and debate about a criminal case for a women accused of getting high on inhalants while behind the wheel of a car before running over and killing a 5-year-old girl in Highland Park a Lake County judge on Wednesday sentenced her to five years. Carly Rousso is only 20 years old, and will now spend years in prison for inhaling keyboard cleaner and killing Jaclyn Santos-Sacramento while she was walking with family on a sidewalk. Judge James Booras handed Rousso five years in prison for reckless homicide and four for aggravated drunken driving.

Rousso’s trial in May made clear the destruction she caused. Evidence indicated she huffed the cleaning product, lost consciousness and traversed across several lanes of traffic, bowling over Modesta Sacramento Jimenez and her three children on a sidewalk in downtown Highland Park.

While many believe Rousso did get off easy, it’s still obvious that huffing chemicals to get high is more dangerous than a lot of people think. Taking any substance that has the ability to impair the body at such a quick rate to the point it creates dizziness, lack of motor skills, or complete black outs puts the individual and others in danger.

Inhalant abuse is especially dangerous to children, because they can die the first time, or any time, they try an Inhalant. This is known as Sudden Sniffing Death Syndrome.

While Sudden Sniffing Death Syndrome has the same possibility to occur with many types of Inhalants, it is particularly associated with the abuse of air conditioning coolant, butane, propane, electronics and the chemicals in some aerosol products. Sudden Sniffing Death Syndrome is usually associated with cardiac arrest, when the chemicals in the inhalant cause the heart to beat rapidly and erratically.

While some may not see Inhalant Abuse as an addiction like other narcotic abuse, the fact of the matter is very clear, it is a deadly addiction that reaps havoc on the lives of the individuals and those around them, while causing serious damage to the body. Addiction to inhalant abuse is just as serious as any addiction, and treatment and recovery is possible. If you or someone you love is struggling with substance abuse or addiction, please call toll-free 1-800-777-9588