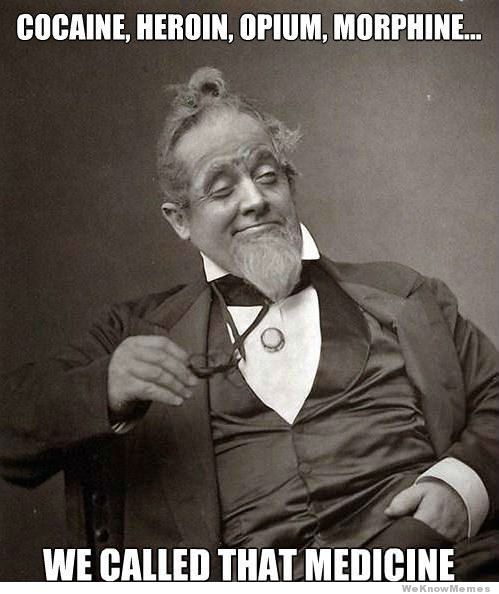 You may or may not be aware of this but, some of the highly-illegal drugs today were once used in virtually any kind of cough drop, tincture, or formula to treat anything from cough to nausea to insomnia. And many of these medical preparations that included drugs like heroin and cocaine we even available over-the-counter!

Nowadays, there are much stricter regulations on what have been found to be illicit drugs, as well as other drugs that are prescribed for our ailments.

But, there are some surprising ways in which illicit drugs are being used today. Here are 5 illegal drugs that will cure you…

First, cocaine is an effective local anesthetic and, once applied, it numbs the area very quickly, usually in less than two minutes. Secondly, cocaine is effective at stopping the bleeding; it’s a vasoconstrictor, which is a drug that constricts – or narrows – the blood vessels. The smaller a blood vessel gets, the bleeding occurs.

Even many pediatricians recommend using cocaine on children’s wounds because of cocaine’s properties that make it a valuable tool for treating cuts and lacerations.

Studies show that your chances of staying away from alcohol will be dramatically increased after tripping on acid. There was an extensive study done in the 1960s and ’70s that revealed how recovering alcoholics are much less likely to drink to excess and how some even stopped drinking altogether for several months.

The reason why this works could be due to the LSD helping the participants to feel more confident, happy and satisfied with their lives, which, in turn, decreased the feelings they had that led most of them to abuse alcohol in the first place. The alcohol-abstaining effects from the one LSD trip lasted for about six months, at which point, if LSD were legal, the patients would be able to return to a treatment clinic for another dose, repeating the process until they were able to transition into sobriety.

#3. Heroin for women in labor

Heroin is an opiate, in the same class of drugs as painkillers, such as oxycodone and morphine. However, heroin itself is actually much more effective than morphine and takes effect in about two or three minutes. In fact, The National Health Service (NHS) in Britain recommends giving it to people in extreme pain, people in surgery, and women in labor.

Now, just to be clear, the NHS is, in fact, made up of medical professionals. The practice in Britain is to give women in labor an injection of heroin to help with the contractions as they give birth. The one-time use doesn’t do any damage and doesn’t cause dependency, because it is only administered when the baby is on its way out of its mother’s body.

MDMA, or Ecstasy, has been shown to help treat people with post-traumatic stress disorder (PTSD). The reason for this is actually the same reason that the drug is popular for recreational use: It releases large amounts of the feel-good chemicals serotonin and oxytocin in your brain, which makes you relaxed, euphoric, and feel at ease. This results in relieving the stress experienced by PTSD sufferers.

When used in a therapeutic setting, MDMA allows PTSD patients to relive their experiences more easily, which is crucial to overcoming the disorder. Ecstasy lets the sufferers do so without being overwhelmed, by activating the area of the brain responsible for controlling fear and stress. Over time, this results in long-term reduction of fear.

#5. Methamphetamine for ADHD and obesity

Desoxyn, the purest form of meth, is prescribed to obese people for quick short-term weight loss. It’s only prescribed as a short-term treatment for obvious reasons, since meth is highly addictive as well as overall catastrophic to your well-being. Meth is rarely prescribed in this way and only when all other treatments fail.

Desoxyn is also prescribed by U.S. doctors to treat ADHD. Considering that sufferers of ADHD typically exhibit symptoms of jitteriness and inattentiveness, which are also associated with meth use, it nevertheless has a therapeutic effect on people with ADHD. When it comes to the brain, nothing is simple, and meth. Like other stimulants, helps regulate brain chemicals called neurotransmitters.

Drugs and dosage are carefully controlled by your medical providers who can monitor the results and adjust your medication accordingly by a medical professional who can monitor the results. In general, you shouldn’t self-medicate any medical problem with alcohol or illicit drugs and you should only take medications as prescribed. If you are struggling with substance abuse and or a psychological disorder, such as PTSD, ADHD, or depression, Palm Partners is here for you. We offer dual diagnosis treatment for people who are ready to end the cycle of drug abuse. Please call toll-free 1-800-951-6135.