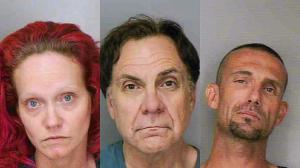 Dr. Gregory Gooden, 61, of Winter Haven was recently arrested at his home for allegedly trading prescriptions for meth.

Since August of 1987, Gooden has been registered in Florida as a doctor specializing in cardiology, agents said.

“Upon his arrest, Gooden told detectives he is no longer practicing,” the Sheriff’s Office stated in a report.

The Polk County Sheriff’s Office launched an investigation that began back in June, which revealed that the doctor had written prescriptions for narcotic painkillers in exchange for meth and cash.

The other players in the scheme are Dennis Wayne Holt, 22, and Lisa Michelle Gilbertsen, 33, two so-called patients of the doctor.

Grady Judd, Polk County Sheriff, said in a statement, “[Gooden] also smoked marijuana with one of his ‘patients,’ whom he later had arrested for stealing his car. You just can’t make this stuff up.”

And, on top of that, it’s quite ironic that a doctor of cardiology – which is a medical specialty that deals with disorders of the heart – was shooting meth of all things. Methamphetamine has a significant and damaging effect on the heart, on a cellular level. It causes inadequate circulation of blood to the heart which is needed for it to function effectively, which can lead to cardiac arrest.

Undercover narcotics detectives launched the investigation after learning that Gooden allegedly wrote prescriptions for hydrocodone to Holt, who exchanged “meth and/or money for the controlled substance,” according to a report.

Holt said that he’s witnessed Gooden inject himself with meth and as well as witnessing the doctor writing prescriptions for other so-called patients.

Agents confirmed the prescriptions written in Holt’s name by checking the Prescription Drug Monitoring Program, a statewide database that was launched more than two years ago in order to deter Florida’s pill mill epidemic.

Also according to the report, “The prescriptions were for either 60 or 90 pills. Gooden did not conduct a medical history, a physical, or any other type of exam for treatment prior to writing the prescriptions for the controlled substance.”

Detectives then interviewed Gilbertsen, suspected car thief, who said she had met the doctor through mutual friends, one of whom told her that Gooden would write her prescriptions, no questions asked.

Another review of the statewide database confirmed that Gooden wrote three hydrocodone prescriptions: one for 20 pills, a second for 60 of the pain pills and a third for 90, for Gilbertsen.

Gilbertson paid $70 for the first prescription but didn’t give Gooden any money for the others, according to a report said. It’s possible that she compensated the doctor with meth or other ‘services’ but, that is not known for sure at this time.

Gilbertson told detectives that she and the doctor smoked marijuana and drank alcohol together at his home.

On one occasion, Gooden fell asleep only to awake and find that both Gilbertsen and his car were missing. The doctor reported his car stolen on August 4th, and gave Gilbertsen’s name as a suspect but also referred to her as a friend.

Gilbertsen was arrested for vehicle theft two days later. On August 19th, while she was in the Polk County Jail, detectives interviewed her about the doctor.

Gooden has since been charged with five counts of obtaining a controlled substance via scheme and five counts conspiracy to traffic in hydrocodone.

Has your substance use escalated to substance abuse, or addiction? One way to tell is if you’ve resorted to committing crimes, no matter how petty, in order to support your habit. This is not the only indication of a problem, nor is it always the case. If you are worried that you may have developed a problem with drugs or alcohol, or if you suspect that someone you love is struggling, call us toll-free at 1-800-951-6135. Our Addiction Specialists are available around the clock to give you answers. Remember, help is available and you are not alone.