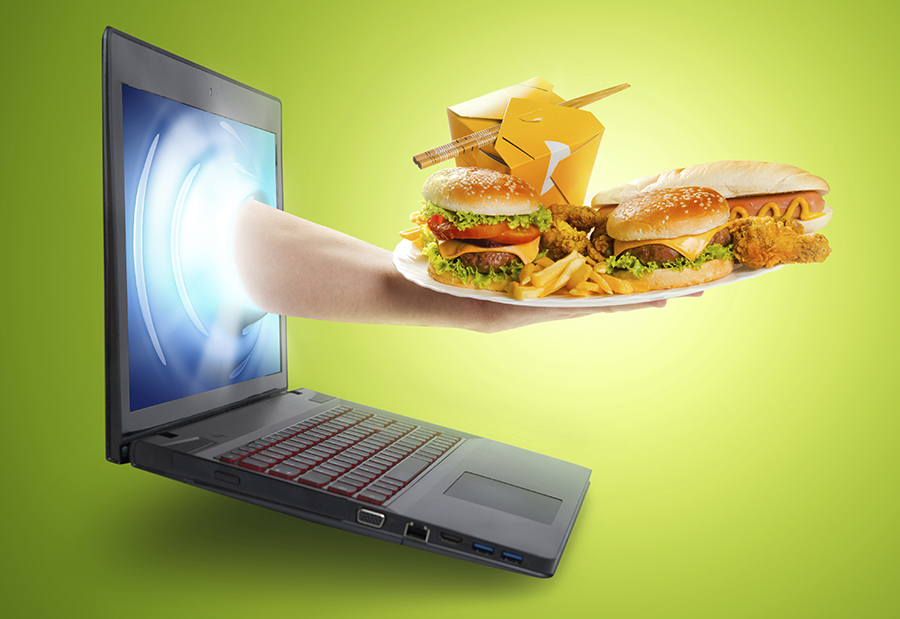 The thought that someone can be addicted to food was not always accepted but now days the idea that a person can have a food addiction has gotten more support from science. Now some are wondering if the next level of food addiction is the online option of outsourcing food and having it delivered via the internet.

New York is reportedly filling up with new businesses that specialize in delivering restaurant food to your door, and other companies like Delivery Dudes already have a reputation here in Florida.

So is this new convenience another helpful feature that we gain from our growing access to the world outside, reaching out through technology and taking advantage of everything put at our finger-tips? Or is this just another way that computers are getting us hooked on our compulsive behaviors, like internet gambling?

Is internet food delivery the future of America as we will soon come to know it? Restaurant-delivery apps seem to be popping up and making headway in popularity already throughout the country. In this quick fix society it is no surprise that people are opting to tap at a touch-screen, pay a bill with digital dividends they never have to physically see to know that it’s spent, and get a delivery of whatever they find on Google in 30 minutes or less.

The New York Post profiled a 27-year-old women recently who said she spends nearly $11,000 a year ordering food from delivery service Seamless. The young lady apparently borrowed her father’s credit card for one week, and in that time was able to rack up about $225 in delivered sushi, salads and other takeout! That is a huge tab for just 7 days!

The national average of peoples meals coming from restaurants, dine-in or take-out, is at an astounding 47%. The trend is taking hold in New York, where that average is up to about 58%. New York resident Mike Lacher told reporters,

“It’s so easy to order that I can imagine there must be a good amount of people who use it for the majority of meals. If I had to guess, I’d imagine Seamless isn’t so much switching people from dine-in to delivery, but more pushing them away from cooking at home.”

Mike Lacher and two partners actually took the whole idea of food delivery orders to the next level, and created an app called Seamless Roulette that delivered random food from a variety of random restaurants to the consumer. The customer only had to specify how much money he or she would like to spend, and Seamless Roulette surprised them with an order. That seems a little risky for me, but spontaneity ain’t my specialty.

The Success of Seamless

Sadly for Lacher Seamless eventually asked him and his team to shut the site down. After a merger with its chief rival, GrubHub last year, Seamless went on to enlarge company. Back in April they went public and raised nearly $200 million in the deal. So at this stage of the game, it does not seem like this particular app is going anywhere anytime soon. Company shares have jumped, and the service now operates in more than 600 cities, so more and more deliveries are going out.

This exciting new enterprise has become very competitive as established industries and hungry entrepreneurs recognized the potential for America to start abandoning its kitchens in favor of ordering food. It has gone beyond just being able to call in a pizza place on a lazy evening. Now delivery services are able to drop off a gourmet meal, and people are much more willing to pay.

This delivery company began in Delray Beach, Florida and quickly added a Boca Raton, FL location in the early days. Now a handful of years later, Delivery Dudes has grown exceptionally. They now boast 15 locations around the country, including:

As well as all over Florida, and over 100 employees or, ‘Dudes’, and these ‘Dude’ delivery just about anything. Products like pizza and Chinese are a standard delivery fare. But for a $5 fee, Delivery Dudes picks up your meal from a large selection of local restaurants that don’t deliver and brings it right to your door.

With these kinds of services being a great way to get some convenience in the midst of a day fueled with work and personal responsibilities, some are wondering if this newest app for convenience will become and unhealthy and obsessive dependence. While many still argue for the legitimacy of food addiction, and others for the recognition of internet addiction, are these new apps going to give us a mash-up of tasty yet terrifying addictions to come?

While ordering food may be changing with the times, the reality that addiction is alive in America is growing more and more prevalent in the public eye. Be it the surge of concerns surrounding the compulsive internet and social media dependence, health and dieting issues or drugs and alcohol, addiction is a lot more than a bad habit and it takes a lot more than self-knowledge to overcome. If you or someone you love is struggling with substance abuse or addiction, please call toll-free 1-800-951-6135