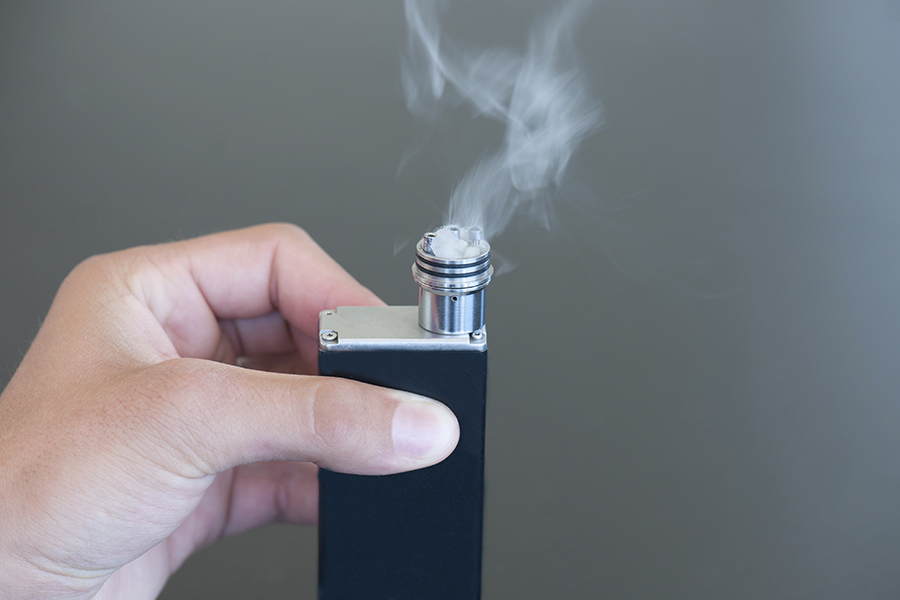 Vaping has become quite the popular trend and many believe it is a safe and healthy alternative to smoking traditional cigarettes. As more and more comes to light about e-cigs and how they work, however, there are some important things to consider.

Many people point to all the harmful chemical additives in cigarettes (nearly 600 additives, 69 of which are known to cause cancer) and claim that e-cigs and vapes don’t have them, making them safer. However, when it comes to electronic cigarettes, a battery-powered device heats a liquid solution (e-liquid) of nicotine and various flavors, creating an aerosol. This is inhaled to simulate the physical sensation of smoking hence the term “vaping.”

We’ve written about potential dangers associated with vaping, specifically regarding the glycerin and propylene glycol that are used as solvents in the e-liquid and how they are converted to carbonyls, such as formaldehyde and acetaldehyde.

Formaldehyde is a colorless, strong-smelling gas used in embalming fluid, building materials and some medicines and cosmetics. It can also be produced as a byproduct of cooking and smoking. Formaldehyde is a known cancer-causing agent in humans (and rats) and is found in cigarette smoke. But, it’s also found in the vaporized liquid of the ever-more popular electronic cigarette.

According to an analysis published Wednesday in the New England Journal of Medicine, the exposure to formaldehyde from e-cigarettes, when based on similar chronic use as regular tobacco cigarettes, could be five to 15 times higher than from smoking cigarettes. Yikes!

The problem with arriving at any definitive answer as to just how detrimental vapes are to the health of the user, is that any such evidence won’t show up until years from now.

“It’s way too early now from an epidemiological point of view to say how bad they are,” said co-author James F. Pankow, professor of chemistry and engineering at Portland State University in Oregon. “But the bottom line is, there are toxins and some are more than in regular cigarettes. And if you are vaping, you probably shouldn’t be using it at a high-voltage setting.”

Pankow adds, “A lot of people make the assumption that e-cigarettes are safe and they are perfectly fine after using for a year. The hazards of e-cigarettes, if there are any, will be seen 10 to 15 years from now when they start to appear in chronic users.”

Pankow and his colleagues analyzed the aerosol e-liquid in what’s known as “tank system” e-cigarettes in order to look for formaldehyde-releasing agents in “hidden” form at various voltages.

And this “may be conservative,” says Pankow.

“We are not saying e-cigarettes are more hazardous than cigarettes,” he said. “We are only looking at one chemical. … The jury is really out on how safe these drugs are.”

“The difference in e-cigarettes is the material that is heated and turns into hot gas as it cools is not tobacco, but two main chemicals,” he said. “When it gets really hot, unwanted reactions occur.”

Therefore, formaldehyde-containing chemical compounds can be released during the “vaping” process as the liquid is heated. Pankow said some e-cigarettes can burn hotter than 1,000 degrees Fahrenheit.

What’s troubling is there already exists some evidence that shows just how bad formaldehyde is: when gaseous formaldehyde, found in funeral homes and other occupational settings, is inhaled, it breaks down in the mouth, nose, throat, and airways. Exposure has been linked to throat and nasal cancers and leukemias. This is supported by findings used by the American Cancer Society, which says that exposure to formaldehyde has been shown to cause cancer in laboratory animals and has also been linked to some cancers in humans.

If you or someone you love is struggling with substance abuse or addiction, help is available. Call us toll-free at 1-800-951-6135 to speak directly with an Addiction Specialist, who understands your situation. We are available day and night to answer your questions and to help you figure out what steps to take next. Recovery is possible.