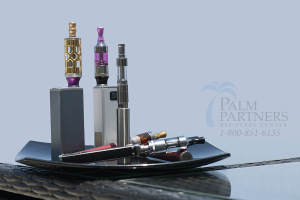 This article is probably going to draw a bit of attention, and I’m sure that there will be a great deal of opinions seeing as how I have personally witnessed how popular ‘vapes’ and ‘e-cigs’ have become, especially in the recovery community. I have friends who dedicate more time and money to customizing their ‘vape mods’ and mixing their ‘vape juices’ than anything else, and it is kind of funny to see this hobby sprout up out of nowhere and become a notable trend. With all the innovations, artsy styles, and various flavors electronic cigarettes are making a lot of waves, but is it possible this new fad is actually a gate-way drug that is just disguised as a helpful alternative to nicotine?

Studies on the E-Cigs

One study conducted some time ago by the University of California, San Francisco found that using these devices is actually associated with the heavier use of conventional cigarettes. One of the lead authors of that study, Stan Glantz who is the director of the Center for Tobacco Control Research and Education at the University of California, expressed growing concern with the increase of e-cigarette use among adolescents.

“We are witnessing the beginning of a new phase of the nicotine epidemic and a new route to nicotine addiction for kids.”

In a more recent study that has been published in the New England Journal of Medicine, neuroscientist Eric Kandel and his wife, Dr. Denise Kandel are raising a few eye-brows, red-flags, and arguments after they issued claims following their data that warned readers and consumers alike that electronic cigarettes, vapor cigarettes and their variations, are very likely to be considered undetected gateway drugs for adolescents.

Based off the findings of the two researchers on recent studies performed on mice, the results reveal that e-cigarettes prime the brain for the use of illegal drugs like cocaine and marijuana. As e-cigarettes deliver highly addictive “pure nicotine” to the brain, the chemistry of the brain was altered in all the mice that the researchers used for the study. These noted alterations did what these scientists say geared up the animals brains for a cocaine addiction. Professor Kandel went on to explain,

“One drug alters the brain’s circuitry in a way that enhances the effects of a subsequent drug.”

Basically saying that by adolescence using e-cigs or vapes, they are conditioning their brains so that when the individual comes into contact with other illicit drugs, it is already more vulnerable and likely to develop a serious substance abuse habit or life threatening addiction.

Kandel and his wife, both from Columbia University, wrote extensively on the subject of the heightened risk to young people and how using electronic cigarettes can affect the developing mind and precondition it for using more dangerous drugs. At the end of their report in the New England Journal of Medicine, the two blatantly caused a bit of a surprised uproar when they wrote:

“Our society needs to be concerned about the effect of e-cigarettes on the brain, especially in young people, and the potential for creating a new generation of persons addicted to nicotine. The effects we found in adult mice are likely to be even stronger in adolescent animals. Priming with nicotine has been shown to lead to enhanced cocaine-induced locomotor activity and increased initial self-administration of cocaine among adolescent, but not adult, rats… Nicotine clearly acts as a gateway drug on the brain.”

So one might say that the real target of this last accusation is aimed more toward nicotine itself and not e-cigs, so technically big tobacco should be more concerned and vapor cigarettes should actually be safer, right? Now even though the typical e-cigarette user is a long-term smoker who has been unable to quit, more and more young people, who may not even have been smokers initially, are taking up the habit as it has evolved into a popular trend with all the variations in styles, and asking about someone’s ‘vape mod’ is apparently a good ice-breaker.

One huge problem is that nicotine has a much more powerful and influential effect on the adolescent brain, which according to this study will lead to later problems with being susceptible to drugs. Professor Kandel, who in 2000 shared the Nobel Prize in Physiology or Medicine for his research on the physiological basis of memory, stands firm on his assessment of the situation. Even more disturbing is that many people actually exploit vapes and e-cigs to consume other drugs because they make it easier to fly under the radar while smoking narcotics in public places.

So the question is, how much can actually be said about the contribution of e-cigs and vapes to the development of addiction or addictive qualities in adolescence who use them? The study published is geared toward identifying the vape and e-cig as a possible epidemic that will end up creating more addicts than ever. Either way this just goes to show that as new drug threats are exposed, along with other health risks being realized in some substances people currently exploit, there is a greater need than ever for awareness as to the devastation of the disease of addiction, and more attention needs to be given to the possibility or recovery. If you or someone you love is struggling with substance abuse or addiction, please call toll-free 1-800-951-6135. We want to help. You are not alone.