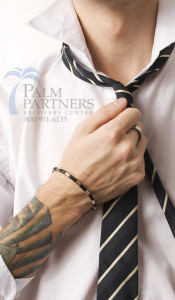 Once reserved for prisoners, sailors, scoundrels, rapscallions, circus freaks and, in general, good-for-nothing lay-abouts, tattoos are popular among pretty much all kinds of folk today. So much so, in fact, one in four people has one, with 2 in 5 people in their 30s having at least one indelible marking on their body.

Now for the bad news.

Even though they have increasingly become mainstream, tattoos still hold a certain stigma to employers alike. Many view getting tattooed as an act of rebellion and a mark of rebelliousness, which only serves to put jobseekers at a disadvantage, says Andrew Timming of the University of St. Andrews in Scotland.

In an upcoming study, Mr. Timming and his colleagues asked participants to assess job candidates based on their pictures, some of which were ‘shopped by adding a neck tattoo. The photos of candidates with the neck ink were consistently ranked lower, despite being equally qualified. In a separate study, Mr. Timming found that many service-sector managers were reluctant when it came to about visible tattoos, especially when it came to positions that involved dealing directly with customers.

A survey of Careerbuilder.com employers revealed that 31% said that tattoos were the top personal attribute that would make them less likely to promote a candidate.

As a person with several large and visible tattoos, I find this kind of thinking to be prejudicial and backwards. But it is not unfounded. Empirical studies have long found that people with tattoos are more inclined to engage in deviant behavior. For example, people who are inked and tatted are more likely to carry weapons, use illicit drugs, and have an arrest record. These associations are stronger for people with bigger tattoos, or when they have more than a couple of tattoos, says Jerome Koch, a sociologist at Texas Tech University.

Tattoos are still considered taboo; so much so that even the armed forces have recently decided to reinstate the stricter grooming standards of yesteryear, despite it resulting in having to turn away people seeking to enlist.

Specifically, the standards restrict the size and number of tattoos that are acceptable, as well as prohibit tattoos from the neck, head and hands, and any body art that can be construed as racist, sexist or otherwise inappropriate.

This change is intended to promote discipline and professionalism; however, as mentioned, it is making it harder to recruit to the army, says Major Tyler Stewart, who handles recruitment in Arizona. His battalion is turning away 50 tattooed people per week.

For reasons such as this, there has been a dramatic increase in the number of people seeking tattoo removal services. Would-be soldiers and other jobseekers are getting their ink removed through a painful, expensive, and lengthy process that involves a laser. Tattoo-removal has surged 440% in the past decade, according to IBISWorld, a market-research firm.

So, if you’re already have tattoos but they aren’t visible, you may want to consider continuing that trend and only getting ink where it can easily be covered by your clothing. For others of you who may already have committed that cardinal sin of tattooing and employment, myself included, you are not completely screwed.

As I said, some employers are getting hip to the ink movement and you just might get lucky. Another option is seeking work where having tattoos is seen as an actual benefit, such as in a prison guard situation or drug treatment setting – to only name a couple, because they give you an air of what’s known as “withitness” and authenticity, that will allow you to bond with and command a level of respect from the people with which you interact on a daily basis.

Recovery Question: Will Visible Tattoos Affect My Ability to Get a Job?

If you or someone you love is struggling with substance abuse or addition, or you know someone who struggles, help is available. Call toll-free 1-800-951-6135 to speak directly with an Addiction Specialist for answers. We are available around the clock.