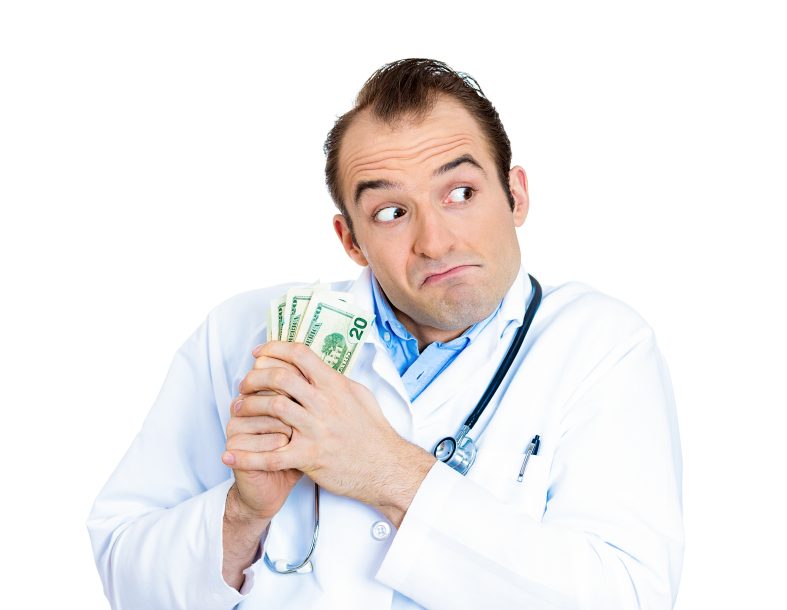 Doctors are supposed to have our best interest at heart. Unfortunately, when money is involved, that might not always be the case. In fact, a new report found a direct relationship between payments doctors receive and the medications they recommend to patients. Physicians who receive payments from medical drug and device makers tend to prescribe more brand-name drugs than generic medications.

The report looked at payment data from pharmaceutical and medical device companies in 2014 and compared that data with medications prescribed by physicians using Medicare Part D during the same period. “Payments” include anything from meals, royalties, promotional speaking, consulting, business travel and gifts. Sure enough, their analysis discovered the more money doctors receive from the medical industry; the more likely they are to push brand-name medications over generic versions.

To be fair, this study was not intended to encourage disdain for the medical industry and greedy doctors. Rather, this study was to analyze the data and research the facts to either confirm or deny suspicions that the public has raised. The medical industry gets scrutinized on a daily basis for being influenced through financial means. This study is the first to confirm one aspect of that suspicion..

Dr. Aaron Kesselheim, an associate professor of medicine at Harvard Medical School, further elaborates by stating the report is less about proving that industry patients sway doctors to prescribe certain drugs, but that it “again confirms the prevailing wisdom … that there is a relationship between payments and brand-name prescribing.”

Is there a difference?

The study also confirms that there is no real difference between brand-name and generic drugs. Generics go through the same FDA standards and often work just as well as name brands for a cheaper priced. Generics are simply not as heavily advertised, so consumers are unfamiliar with the names.

There are some exceptions, however. Dr. David W. Parke II, chief executive of the American Academy of Ophthalmology, explained in the report, that for conditions like HIV/AIDS, generics are typically not available or not nearly as effective. Some complicated conditions leave little room for non-generic options.

“In some cases, there are very appropriate and clinically valid reasons” for doctors who are outliers in their prescribing, he said.

“You can debate if these payments are good or bad, or neither, but what isn’t debatable is that they permeate the profession,” said Dr. Walid Gellad, associate professor of medicine at the University of Pittsburgh.

ProPublica also listed the top 50 companies that dispense payments and the highest earning doctors as part of its report. You can use their search engine to determine if your doctor has received a drug company payment.

Keep an open mind when it comes to treatment options. Often, generic options are just as effective as more expensive name-brand options. Speak up to your doctor and let them know you want to explore other medication alternatives. If you do not ask, you will never know.  If you or someone you love is struggling with substance abuse or addiction, please call toll-free 1-800-951-6135.