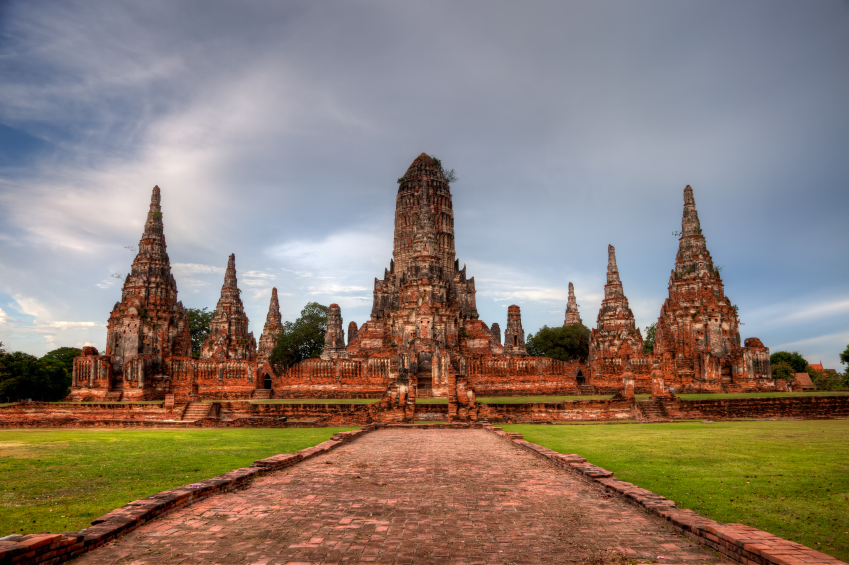 There’s a temple called Wat Thamkrabok in Thailand that operates as a no-cost drug rehabilitation center. The temple, run by Buddhist monks, has garnered the name “Vomit Temple” and it’s not for the faint of heat.

Every day, patients at the center are told to consume a “secret” cocktail made of 120 herbal ingredients which makes them vomit. They must continue the treatment for at least five days. The process is believed to cure addiction by purging out their demons. You only get one chance to get clean.

So what happens if you don’t? Well, you’ll be cursed for eternity, of course. Patients must vow to stay off a list of drugs and are threatened with a curse if they break those vows.

As soon as you arrive you must take a vow known as the “Sajja.” In Thai, the Sajja means you are making a commitment to yourself. The vows are told to you by a monk and you must say them out loud in front of the founders, the monk and the temple. It’s the ultimate commitment to get clean.

The belief in Thailand is that breaking the Sajja is really dangerous.  Breaking the promise means you’ll be back to your old path that this time will lead to your demise. It’s free to come here but you only get one shot. There are no second chances. If you decide to come here, you are making a commitment to give up drugs for the rest of your life.

Of course all treatment centers want you to commit to a lifestyle of sobriety however one has to wonder if the intense nature of the vows produces a stronger commitment and prevent relapses.  It definitely seems like an “ends-all- be-all” way of approaching treatment that could be successful.

History of the Temple Thamkrabok

The temple Thamkrabok started functioning as a rehab center back in 1959 and now attracts foreigners from across the world.  Recently the temple has gained media attention as a subject for a new documentary about Australians who are turning to Thamkrabok to treat their meth addiction.

Meth, known overseas as “ice,” has become a huge problem in Australia where over 70,000 people are estimated to be dependent on the drug.

The temple has been functioning as a rehab center since 1959, attracting numerous foreigners from across the world. It has gained media attention as the subject of a new documentary about Australians who are turning to Thamkrabok to treat their meth addiction. Meth, known overseas as “ice,” is a rising problem in Australia, where over 70,000 people are estimated to be dependent on the drug.

In the documentary, it discusses how Australia has failed to address the ice epidemic driving increasing numbers of addicts to a place like Thamkrabok for an alternative form of treatment.

The documentary claims that the country has failed to address the problem, driving increasing numbers of addicts to places like Thamkrabok seeking an alternative form of treatment. Once patients arrive, they are in for a grueling daily routine.

“The routine at the temple involves going out to the yard to help with daily tasks, meals and then, of course, there’s the vomiting,” says Steve, a patient from Perth featured in the documentary. “Vomiting is at 3pm every day. Foreigners must vomit for the first five days. The vomiting is intense.”

Last year, an estimated 1,300 foreigners traveled to Thailand to go to rehab for treatment from all sorts of addictions like drug and alcohol addiction to eating disorders and even depression. There are other rehab options available like the renowned Hope Rehab which is a high-end luxury rehab that attracts famous clientele from all around the world. At the center, patients pay $10,000 for beach views and activities like horseback riding. And unlike Thamkrabok, they are not forced to drink a vomit-inducing potion every day.

Still, for those desperate to seek treatment for their addiction who can’t quite afford other options, Thamkrabok is a more than ideal option. Since rehabs in the United States can run close to 30,000, the fact that the temple is free is a huge reason why the temple is so popular with westerners.

Since often insurances cover the expense of rehab, it would be best to check into that before taking a more extreme option like traveling across the globe. Insurance could be able to cover your expenses for months rather than just a few short days. Still, it’s encouraging that options like this exist for those who desperately need it.

If you are falling into the path of addiction, get help immediately. Time is of the essence. If you or someone you love is struggling with substance abuse or addiction, please call toll-free 1-800-951-6135