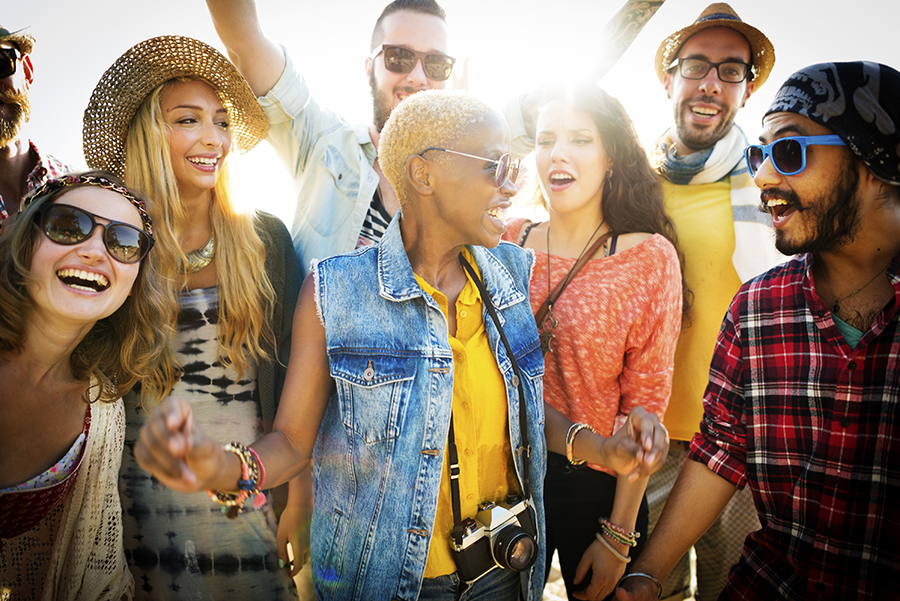 I personally found my solution in a fellowship of recovery, and as with any group there are disagreements. You may here a lot of mixed opinions on where recovering addicts and alcoholics should and shouldn’t go.

Some people keep saying ‘if you hang out in the barber shop, you’re going to eventually get a haircut’… and I understand the concern… but my book given to me by my sponsor tells me I can go anywhere any other free man can go, as long as I’m willing to keep consistent with my simple spiritual practice.

I have been blessed enough to have the obsession to drink and use drugs removed, although I remain aware of the fact taking action is the only way I’m able to keep this serenity, so I believe what I was told from the beginning: Recovery is freedom.

So needless to say, I go out a lot.

I go to concerts and block-parties, raves and music festivals because I love music… and I do so sober and unafraid.

So it is awesome to see that there is a movement in place to help support young people (or just the young at heart) in recovery who love attending summer music festivals who may still be struggling to figure out how they can have fun in these kinds of settings and stay clean.

It is said because most festivalgoers drink and do drugs it makes it especially difficult for music fans struggling with addiction or in recovery to steer away from temptation. While my experience has been a little different, I can still acknowledge how awesome and useful the ‘sober tent’ idea can be for those who need a little help, because honestly we all need a hand sometime.

An account executive living in Kentucky named Patrick Whelan was one recovering individual who immediately assumed that his days of attending music festivals had ended when he stopped drinking and using drugs in 1997. But before long, Whelan realized he wasn’t alone.

Patrick met fans in recovery who were tabling and holding meetings at a The Other Ones concert to provide support to other sober music fans, and it was then he was inspired to create similar spaces at other events.

Along came “Soberoo,” an annual gathering at the original Bonnaroo festival, in 2002 which Patrick participated in creating. In 2008, “Soberoo” had grown to the extent that Bonnaroo organizers asked him to jump on a conference call give them a more detailed definition of the movement, and actually offered their assistance.

Whelan has since helped recruit and deploy volunteers who staff tents at music festivals around the country. More and more festivals have been added over the years and they have actually reached the point where more promoters are requesting their presence at events than they can actually handle. Whelan expanded on his philosophy of their movement saying,

“We’re just filling the gap where no service was provided before. These festivals are creating a small city for the weekend and in that population there’s a group of people who would need our support. Some of these festival promoters have said they can’t believe they didn’t think of this first.”

By the end of the year the group will have participated in 15 festivals, including:

If you feel like you have been missing out because you haven’t seen “Soberoo” around, it’s because the group adjusts the name of their initiative to match the theme or feel of the event at each festival, for example:

Their mission when attending these festivals is very honest and straightforward. The group is not associated with any 12-step programs or larger sobriety and solely provides support for anyone trying to find support and stay sober. They also do not shun or condemn those who don’t practice sobriety, but simply provide any information that may be useful to anyone.

Apparently all types of people who may not necessarily be in recovery also stop by these sober tents, including:

This year marked only their second time at Lollapalooza, so awareness of their presence is still an issue, but the groups are standing strong and doing their best to provide the additional support and assistance needed for some in those tough times.

Festival promoters have been immensely supportive of the group, providing resources and assistance like:

The group relies on donations to cover costs, but this may change soon depending on additional funding the group is currently seeking. In the meantime, it is experiences like a festivalgoer seeking them out after seeing the tent the previous year and making the decision, then, to change their lives that make all the work feel worthwhile. Whelan said,

“I never imagined that what we’re doing would have that kind of impact on someone’s life. That when the festival was over they maintained their dedication to making a change in their life and 365 days later they come seek us out and tell us what we did inspired them to get sober.”

The amazing thing here is definitely that while trying to provide a source for support, they are also inspiring other people and raising awareness. These kinds of movements are truly awesome because they not only help people stay sober in times they may need the extra help, but they actually prove to people who may question a sober life-style that it is absolutely possible to keep enjoying the things they love in sobriety.

Recovery isn’t based of fear and avoiding life. Real recovery is about being able to have the life you have always wanted, live the way that fulfills your life, and do so without needing substances to show you how amazing your experience is.

Being sober doesn’t mean giving up and not having a life, it means having the kind of amazing life you might have never known you could have. It all starts with making the decision to make the change that could save your life. If you or someone you love is suffering, please call toll-free 1-800-951-6135