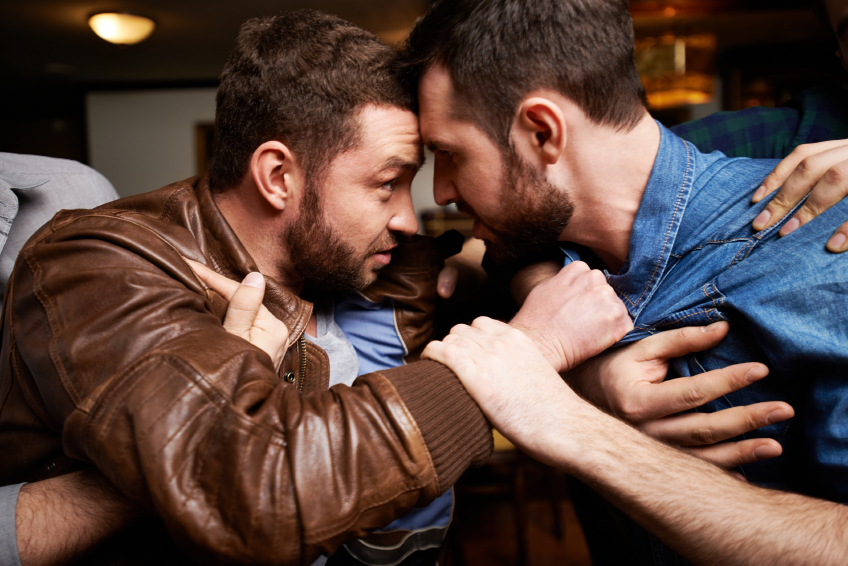 If you’ve been to enough bars, you have witnessed the following scenario: That guy or girl that just seems to switch into an aggressive impulsive temperamental person the minute they down a few drinks. You know the type: The drinker that ends up in some sort of uncalled for unreasonable fight at the end of the night or worse, is kicked out the bar by several bouncers.

What’s that about? Alcohol affects people in many ways. While one person can light up and become a social butterfly, another person becomes temperamental and unbearable. According to new research, it turns out that aggressive behavior from drinking may be linked to a genetic mutation.

Researchers in Finland found that over 100,000 of the country’s residents, roughly 2.2% of the population, suffer from a serotonin 2B receptor gene mutation which is broadly associated with poor impulse control and aggressive behaviors.

For the study, they assessed personality questionnaires and both aggression and alcoholism screening tests for the 14 people carrying the gene, as well as the 156 non-carriers.

Lead researcher Roope Tikkanen, of the University of Helsinki, and his team noted other personality traits in these gene carriers such as:

Tikkanen did note, however, that their findings could be skewed due to a small sample size and that half of the mutation group was comprised of female relatives of violent offenders.

“The impact of one gene on complex phenomena is typically minor,” said Tikkanen. “But it is possible to identify the impact of such a genetic mutation in the Finnish population, as our historical isolation has led to a relatively homogenous gene pool.”

Regardless, this is not the first study to discover a possible link between a gene mutation and alcoholism. A study published in 2013 in the journal Nature Communication discovered that the gene Gabrb1 regulated alcohol consumption, but can lead to a drinking problem when faulty.

Still, until there is a true answer to why some people are aggressive while drunk, the only solution is awareness. Alcohol reduces our ability to think straight. It narrows our focus of attention and loosens our inhibitions. Alcohol can result in saying what is on our mind without thinking of the consequences which can have dangerous outcomes.

The way we process information is affected by alcohol too. We are more likely to misinterpret other people’s behavior and misread social cues. That is one of the main reasons why aggressive behavior is so common. Frequently, situations are perceived in a different way because of the effect alcohol has on our brains.

Another reason for aggressive drunken behaviors lies in the fact that often we hold things in and when we are drunk, we latch on to alcohol as an excuse to act aggressively and bluntly. People believe that socially, their behavior will be more accepted since they were drinking (the “blame it on the alcohol” effect).  Aggressive actions are usually more easily explained and forgiven when someone has been drinking. Therefore, if you want to be aggressive, you will do so without experiencing the same consequences you would if  sober.

No matter the reason for drinking, alcohol can become disruptive to your life and hinder your success. If you feel like you are losing control, it could be time for you to talk to a professional about your drinking habits. If you or someone you love is struggling with substance abuse or addiction, please call toll-free 1-800-951-6135.