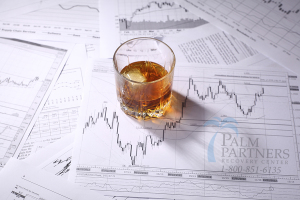 Some Americans go home after a long day, and tend to ‘unwind’ by having a glass of wine with dinner. Just that one glass would put someone in the top 30% of American adults in terms of per-capita alcohol consumption. If they were to turn around and add another glass of wine, that would bump them up into the top 20%. But some still break through that to the top 10% barrier of American drinkers, who drink more than two entire bottles of wine with every dinner, not just once in a while. Even then with two bottles, one would still be below-average as far as alcohol consumption among those top 10% of Americans. Studies have shown that Americans in this top 10% of alcohol consumers go above and beyond to get there.

24 million adults over age 18 make up the top 10% of American drinkers. This demographic on average consumes 74 alcoholic drinks, and that is per week! For anyone who knows their way around a liquor store, that comes out to more than four-and-a-half 750 ml bottles of Jack Daniels, 18 bottles of wine, or three 24-can cases of beer. And yes, we are still talking about 1 week of drinking. Or if you want to narrow it down a little more, that’s about 10 alcoholic drinks per day. So some people are wondering, does America have a drinking problem?

These figures come from “Paying the Tab,” an economically-minded examination of the costs and benefits of alcohol control in the U.S. by Philip J. Cook. Specifically, these are calculations made using the National Epidemiologic Survey on Alcohol and Related Conditions (NESARC) data. Philip J. Cook has made a huge contribution to related studies in his 40-year career at Duke University, and has provided the chance to teach and research on a variety of issues relating to public safety, health, and social policy.

“I agree that it’s hard to imagine consuming 10 drinks a day. There are a remarkable number of people who drink a couple of six packs a day, or a pint of whiskey.”

Statistics in the Alcohol Business

Cook stated during an interview in regards to double checking the figures and estimates of this recent publication of the study. In his book “Paying the Tab: The Costs and Benefits of Alcohol Control” Cook notes the top 10% of American drinkers account for well over half of the alcohol consumed in any given year! So out of all the alcohol in the entire country, that 10% is drinking more than half of it! On the other hand, people in the bottom three percentiles don’t drink at all, and even the median consumption among those who do drink is just three alcoholic drinks per week. In comparison it was next to nothing!

As surprising as this may seem to some people, the actually curve of this average isn’t exactly unique. According to Cook the Pareto Law states that “the top 20% of buyers for most any consumer product account for fully 80% of sales”. The rule can be applied to everything from whiskey, to Walmart flip-flops, to your regular morning Starbucks.

However the consequences of the Pareto Law are drastically different when it comes to industries like alcohol, tobacco, and now the growing marijuana business. Just as an example if you consume 10+ drinks per day, you almost certainly have a drinking problem. But the beverage industry is heavily dependent on this kind of consumption for their profits. So when it comes to raising awareness, of course the companies will do the bare minimum to stay in business. Cook writes,

“One consequence is that the heaviest drinkers are of greatly disproportionate importance to the sales and profitability of the alcoholic-beverage industry. If the top decile somehow could be induced to curb their consumption level to that of the next lower group (the ninth decile), then total ethanol sales would fall by 60 percent.”

So it is fair enough to say that based on these numbers, you can quickly make a connection between the over-all averages of consumers and see why there is such a concern with the prominent drinking problem in America. Alcoholism and alcohol abuse are no rarity in today’s society, but often times it is swept under the rug, or people convince themselves that they do not qualify for that top 10%. In reality all it means is that more people need to learn the dangers of excessive alcohol abuse, and the reality of those who struggle with alcoholism.

Alcoholism is a progressive and deadly illness, and it can sneak up on those who consider themselves to be average or moderate drinkers. The top 10% of American drinkers consume more than most would have guessed, and with the rate of consumption rising, the risks of serious issues with alcohol abuse or alcoholism become more and more dangerous, and the threats of long last effects before more deadly. If you or someone you love is struggling with substance abuse or alcohol addiction, please call toll-free 1-800-951-6135