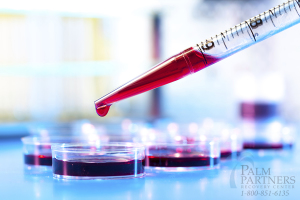 Depression is truly an insidious and devastating mind-state to be trapped inside. For countless people, especially addicts, it can be the difference between a life worth living, and an obsession of fear and hopelessness. It tears down your defenses and infects everything you live for, and it can be cleverly disguised with a smile. Some scientists now believe that there may be a genetic code that will unlock some mysteries behind depression, and that maybe the key to treatment is encoded in the mark depression leaves in the blood.

According to a paper in Translational Psychiatry and the online medical journal there are blood markers that have been found with the potential to diagnose major depressive episodes. The author of this journal entry, Professor Eva Redei, claims that a test using these would “bring mental health diagnosis into the 21st century.” With the concept of being able to get a step ahead of treating major depressive issues this could greatly transform the treatment and society’s understanding of mental illness if the blood test can be verified to be reliable.

Major depressive disorder (MDD) is one of the most damaging conditions established in the modern age. Under-diagnosis is rampant in most cases of MDD and other depressive disorders; it is noted that an estimated 6.7% of North Americans are affected each year, which is an average that appears to be on the incline as time goes on, making the need for treatment more relevant than ever.

Furthermore, the lack of an objective test to prove where the condition exists and who suffers has facilitated widespread assumptions that many diagnosed individuals are faking their condition. Some even go so far as to speculate that depression does not exist at all.  So naturally, few things are as damaging to a person with depression who wishes to recover or get help as the fact that those around them, especially those closest to them, don’t believe their condition even exists. Be be assured, for many people depression is very real, and has crept into every aspect of their lives.

Professor Eva Redei of Northwestern University compared 32 patients diagnosed with MDD, based on clinical interviews, to 32 controls of a similar age. During this stage of testing she identified nine RNA markers distinctive to people suffering from depression. These differences in the readings were not just noticeable, but actually quite dramatic according to Redei’s research, reducing the chances of false diagnoses.

Antidepressant medications were present in some of the subjects of the experiment, but these patients were still showing symptoms severe enough to be classified as signs of depression. Another factor that may provide a great deal of support to this theory is that there was no difference in the blood markers between those on medication for their depression and those who were not.

During the study Redei observed quite an astonishing change. The patients were given an opportunity to experience forms of treatment, and patients were involved in comparing cognitive behavioral therapy (CBT) over the telephone and in person. This study found telephone therapy as effective as face-to-face. The markers for the subjects of the study who eventually came to benefit from the CBT were different to those that didn’t respond to the CBT of have a notable benefit, even before the therapy began. This discovery helped inspire the notion that there could be testing developed through blood markers that would actually match treatments to individuals based on what would be most effective. This discovery can also serve a great purpose to those suffering with depression and substance abuse and the treatment of a dual diagnosis.

Six of the RNA markers changed to match up with the markers of the control subjects for those patients who should a definite positive response to treatment to the point where they were no longer depressed, but three of the markers remained distinguishable.

“These three markers move us towards the ultimate goal of identifying predisposition to depression, even in the absence of a current depressive episode,” Redei says.

Hope for the Hopeless

For those who have struggled with depression and with the idea that it might not even exist, this new study may prove to be hope for those who believed themselves hopeless! Not only does the study represent the first biological indicator of depression, but the presence of the remaining three distinct markers during remission of the condition offers hope that those most genetically susceptible to depression may actually be able to get preemptive treatment that would help them evade serious episodes of depression completely.

Professor Redei has acknowledged the need to replicate the research with more people and with more frequent testing in order to really solidify the findings, and Redei has stated she is working towards this. She also hopes to test capacity to distinguish forms of depression, such as manic depression (bipolar disorder) and other more specific forms of depression.

This would be a great accomplishment, because drugs given for depression, unless combined with mood stabilizers, may in fact increase the risk of suicide when given to people with bipolar disorder, so being able to pin-point the illness and determine the best method of treatment, there could be a great deal of serious suffering alleviated. Especially given that depression is often credited to being on a pretty regular and intimate relationship with addiction, which tends to only continue the cycle of substance abuse and push those who suffer closer to the breaking point. This new research, in correlation with the treatment available in the recovery community, offers a new and inspiring hope to those who feel trapped.

The ability to not only prove the existence of depression, but also to be able to track the differences in depressive disorders and the genetic characteristics that could distinguish treatment opportunities sounds like a dream come true for many who work with depressed patients or for people suffering from depression. With depression and addiction going hand in hand there is much to be gained in this news, and it could mean an even more elevated understanding of dual diagnosis for those struggling. Thanks to the work being done there may be a possibility that the dream will soon be a reality, and thanks to a little blood work, treatment may be able to make a better mark once we learn how to read the markers already there. If you or someone you love is struggling with depression, substance abuse or addiction, please call toll-free 1-800-951-6135. We want to help. You are not alone.