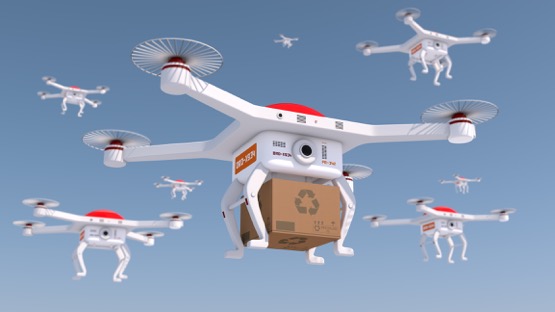 Californians expecting to get their marijuana delivered via drone should not hold their breath. A new set of regulations will make it harder for California businesses who try to deliver pot in unique ways.

The legalization of marijuana has raised a host of controversy. For one, the question of who has the right to distribute pot is already a complex issue. However, now there is the question of how these products get delivered.

Pot Drones? Should they be allowed?

California legislators are hoping to get these questions answered before issuing dispensary licenses next year. They came together this month to lay down the rules. Ultimately, it was decided that marijuana could NOT be delivered by drones.

The decision was part of the Commercial Cannabis Business Licensing Program Regulations released by the state.

“Transportation may not be done by aircraft, watercraft, rail, drones, human-powered vehicles, or unmanned vehicles,” the regulations read, according to Ars Technica.

While deliveries will be allowed, they must adhere to the following guidelines:

“Deliveries may be made only in person by enclosed motor vehicle. Cannabis goods may not be visible to the public during deliveries. Cannabis goods may not be left in an unattended motor vehicle unless the vehicle has an active alarm system. Vehicles used for delivery must have a dedicated, active GPS device that enables the dispensary to identify the geographic location of the vehicle during delivery.”

The news will be a major disappointment to the handful of businesses in California who already promised future pot deliveries by drone. One company, MDelivers, said the opportunity to deliver marijuana via drone was “unmistakable.”

Nevertheless, the company CEO did not count on lawmakers forbidding drone deliveries:

“After navigating the complexities of medical marijuana permitting, the state and FAA licensing process was actually pretty simple. Nobody can jump in at the 11th hour and rewrite the laws of aerodynamics,” Chris Boudreau, CEO and founder of MDelivers said in a blog post before the regulations were announced.

With the new policies in place, there is no telling how entrepreneurs will get marijuana to their customers. Even if drones are off the table, there are a variety of other new, interesting methods being considered.

“We may see a vending machine attached to a self-driving car before we see a drone,” Marshall Hayner, CEO of Trees Delivery, told Mashable.

As California prepares to expand its cannabis market, there continues to be challenges among those against marijuana legalization, especially when it comes to the products crossing state lines illegally. This has already been a major concern for states where port had been legal for recreational use such as Colorado and Oregon.

Surrounding states are trying to address the marijuana diversion issue by requiring pot businesses to track their product from “seed to store.” Time will tell how these sorts of issues will be regulated.

As more and more states legalize marijuana, logistical challenges remain such as how the products can be delivered. Marijuana remains illegal under federal law, where it’s still classified as a controlled substance. This results in a variety of challenges in states like Colorado where recreational marijuana is legal.

The federal government requires that Colorado and any state that legalizes marijuana work together to prevent:

It is important to remember that like any drug, marijuana has the potential to be abused. Do not feel shame for feeling out of control of your marijuana use. Stigma should not prevent you from seeking treatment. If you or someone you know is struggling with substance abuse, please reach out today. Do not wait. Call toll-free now.