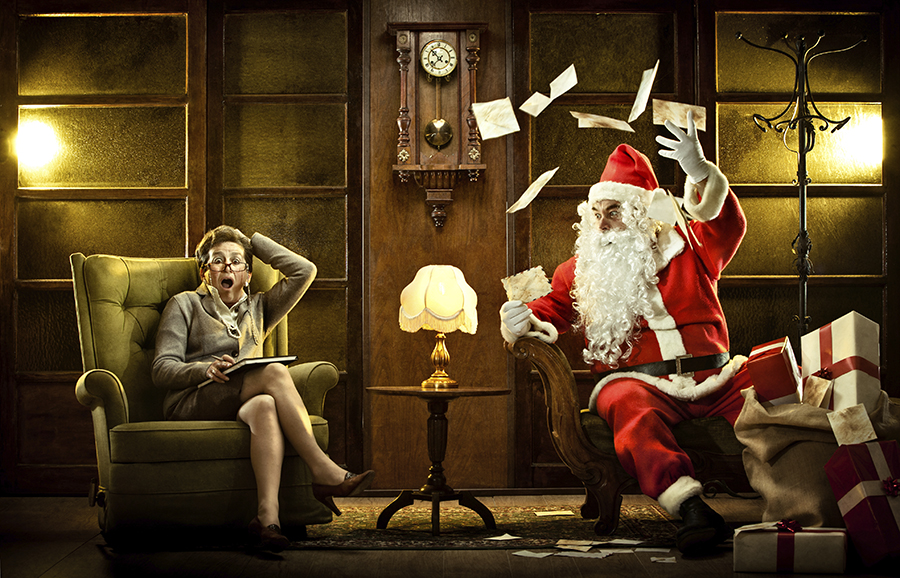 Twas the week of Christmas, and with holiday cheer and joy through the world also comes even more crazy news stories. Some creepy nativity, some drug peddling Santa, and a new way to clean up some holiday trash all makes up a great crazy news story wish list. Guess what, Santa ain’t happy!

Earlier this month, Jasen Dixon of  Sycamore Township, Ohio set up what seemed like a piece of a Nightmare before Christmas in the front yard, which was decorated with an insane display of skeletons as the three wise men, and a demonic looking baby Jesus. As an Ohioan myself, I find this hilarious!

“I wanted a nativity scene and I worked with what I had.”

Apparently his neighbors aren’t huge fans of his work, and neither is his father, who takes anything bad that happens as opportunity to blame the scene. He told the station on the average they probably get 30 or 40 cars stopping to pictures. People that follow zombie movies especially seem to love it.

Officials in Dixon’s hometown have demanded the zombie display be removed, but insist it’s a zoning issue, not a zombie issue. Township Administrator Greg Bickford claims that the problem is the manger occupies too much of the front yard.

Dixon has already received two violations, but he feels the orders to dismantle it violate his constitutional rights to free religious expression.

“I’ve lived here for 15 years and I’ve never had a violation of any kind. It’s a holiday decoration. I know if it was a real pretty nativity scene they wouldn’t be saying anything.”

Dixon was given until December 26th to take the zombie nativity off his property without being penalized. As far as the zombies are concerned, they seem happy to express their Christmas spirit.

After photos were posted to Facebook, the pot shop received hundreds of complaints. Residents we outraged that the paintings were prominently displayed where children could see them, and seemed to specifically promote marijuana consumption to kids with cartoons.

The cannabis Christmas pictures of Kringle may have been removed from the window on Tuesday, but the holiday pot propaganda may have attracted the heat to the Harbor House of Dank. The office of Los Angeles Councilman Joe Buscaino told reporters that this particular dispensary may not be following state guidelines.

Ryan Roche from Utah County was hospitalized for chugging a quart of eggnog so quickly that he inhaled some of creamy holiday beverage into his lungs earlier this month.

Roche told reporters that he participated in an alcohol-free eggnog chugging contest at a holiday office party earlier this month, during which he topped off a quart of eggnog in 12 seconds without taking a breath, but soon began coughing and gasping. Hours later, a friend drove him to the hospital where doctors told him he had eggnog in his lungs.

The office’s reigning eggnog champion was put on oxygen and antibiotics and released from the hospital after three days, and shortly after he states he has fully recovered. Maybe next year he will ask Santa for some tums.

Goats may not seem like the most jolly creatures in the animal kingdom, but they are known to eat just about anything. So why not a Christmas tree?

Vince Thomas is a longtime volunteer firefighter who has come up with a new use for his family-owned goat herding business that might be here just in time for the holiday clean up called “Goat Grazers.” Thomas is launching a new program with the Truckee Meadows Fire Protection District on Friday to use his 40 goats to help recycle Christmas trees.

He says he got tired of watching people discard the trees in landfills or dump them on public property, where they became a fire danger, and that once a goat digs their teeth into a tree, they devour all the pines and leave the bare skeleton of the tree, which can be discarded much easier than just tossing the whole thing once the gifts have been snatched out from under it.

That’s one was to recycle your Christmas leftovers. Pretty sure the goats will take care of those leftover cookies too.

Hopefully you were able to enjoy your holiday, some of these folks definitely went all out for theirs. Just avoid zombies and eggnog. That doesn’t even sound like a good combo to begin with. While these stories may be funny, it is important to remember to be grateful during this holiday season, because not everyone will see next years. If you or someone you love is struggling with substance abuse or addiction, please call toll-free 1-800-951-6135