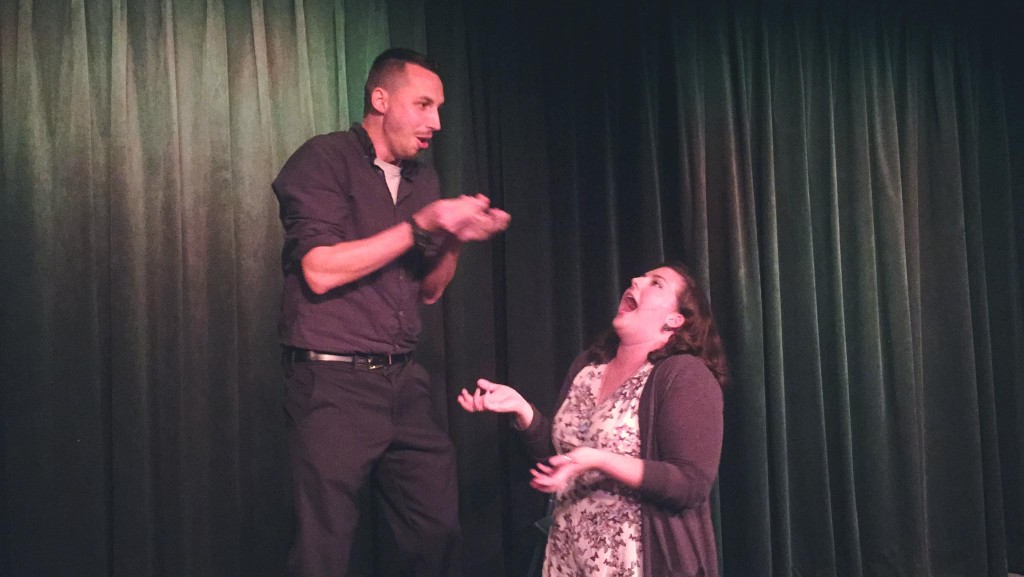 Cody Withrow, co-founder of I Am Improv, performing on stage.

For many of us, the idea of stepping onstage and being asked to perform without a script sounds terribly frightening. However, as an addict, it could be just what you need to finally free yourself from years of being trapped in your chattering mind.

Improvisational comedy allows you to gain confidence and communicate in an expressive way. Over time, Improv can help you acquire skills such as being spontaneous, trusting others and listening that can transform your life after recovery.

Many addicts use drugs to feel happier, relax and free themselves from depression and anxiety. Improvisation has been proven to help with coping with those emotions. You will finally learn how to feel free and “high” without the use of drugs.

Social Anxiety disorders affect 15 million Americans. People with social anxiety often try to overcome their social anxiety through unhealthy habits like using drugs which can lead to a drug addiction. Improv has been studied to treat social anxiety. Researchers have seen a positive correlation between Improvisation and decreasing social anxiety.

So what is Improv?

Improvisational Comedy is defined as a form of live theater in which “the plot, characters and dialogue of a game, scene or story are made up in the moment.” Like me, you may have heard about Improv from the popular television show from years ago called Whose Line is It Anyway. Improvisational acting is considered one of the hardest forms of acting to master because of the spontaneous nature of the art form. Everything is made up and unrehearsed.

Withrow elaborated on how Improv was able to transform him on a personal level after years of being consumed by a drug addiction to opioids. He took the time to talk about how he feels other recovering addicts could benefit from participating in improv.

How did you get involved in improv?

Withrow: I’ve done improv for the past 26 years; I just didn’t know it was improv.  I’ve always been making up and doing very funny stuff but about a year and half ago, I met a friend named Mike. After meeting, we thought to ourselves ‘Why don’t we start doing something that incorporates comedy?’ and we thought ‘Wow, what about improv?’ We’ve heard of improv classes. Long story short, we got an improv book, we brought it to a friend’s apartment and we started doing improv games. They were hilarious. We joined a drop in class, we met a teacher, started auditing classes and it kind of went from there.

Can you describe how Improv has helped you grow on a personal level?

Withrow: It’s made me more confident. I didn’t actually think that was going to happen at all. I didn’t think there would be any improvement. But what happens in the theater, it goes into life and vice versa. So art imitates life; Life imitates art. Since doing scenes, I’d be more confident. I would yell more. I could do boisterous characters. It actually let me be freer.  I call it spiritual lubricant. I felt like I was lubricating myself spiritually. I felt like I was able to do more stuff adaptable in the real world because I was getting this kind of life practice in improv scenes. It was very interesting.

I definitely found a new respect for my body and I realized an actor’s ultimate key is the body. It helped me get in touch with my awareness of my recovery with drugs. A lot of it was done because of how much I hated myself. I never liked my body or my body image. So improv was really about embracing this body I have as a tool in order for me to embrace these characters, to sing and dance and to try different movement.

You mentioned your addiction. Can you go further into your drug addiction?

Withrow: Yes I can. I was addicted to pain killers for years, five years. I got on them at 17. I started smoking weed at 15 or 14. I knew off the bat I was an addict because I wanted more and more and more. Weed wasn’t enough. I took painkillers. Painkillers wasn’t enough. Actually it was. I just needed more and more of them. I became homeless. Parents kicked me out. I was a mess. I didn’t eat. I didn’t sleep. I cashed bad checks. I wasn’t even a person anymore. I was like Gollum from Lord of the Rings, just this skinny frail creature that lived outside and did anything to get high.

How did getting involved with improv help in your recovery process?

Withrow: Improv was not involved at all with my immediate recovery. It wasn’t until I had five years of sobriety that improv was involved. I will say that laughter and playing around was always there but I didn’t know it was improv.

But yes, improv can definitely be used in the early stages of recovery. I wasn’t aware of the tools but improv can help with many things. First of all, it gets you out of your mind. The cool thing is you get kind of thrown into the present moment and the improv games are best done without thinking. The more you think, the more you’re–I don’t want to say wrong, but the more it’s kind of off.

What tools learned in improv can apply to life for a recovering addict?

How can introverts be involved? A lot of addicts deal with social anxiety or may have been introverts. What can you say to motivate someone who’s too intimidated to get involved?

Withrow: Good Question. Improv is best done like recovery is best done. The beginning of the first step is ‘We.’  The first word ‘We’. We are powerless. We admitted we are powerless, and that our lives have become unmanageable. So when I’m doing a workshop, we never throw anybody out  in the middle of the circle. All the games are done together in unison and that’s the best way to do it.

When you see other people being silly, it gives you permission so we like to give everybody permission together. We never want to single anybody out and I think it takes time to to develop  wanting to do a scene by yourself. But in the beginning, we do group games that require all unison, everybody’s doing it together. No one is not doing something.  There is definitely a risk, no matter what, there is a risk that has to be taken.

Are you ready to take the risk? If you’re eager to delve in or simply watch a show, you can find more information on the I Am Improv website and locate events on their Facebook page.

Ultimately, getting out of your comfort zone helps tremendously in your life after recovery. Finding new activities such as joining an Improv class can be a healthy way of “feeling high” without the use of drugs or alcohol.  If you or someone you love is struggling with substance abuse or addiction, please call toll-free 1-800-951-6135