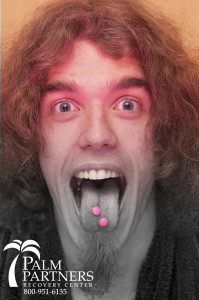 One street drug that has been growing recently in publicity and popularity has some seriously troubling and lasting side effects on users. The drug referred to as “Molly” or “Ecstasy” is MDMA (short for 3,4-methylenedioxymethamphetamine) and is a man-made substance which can include chemicals or additives such as caffeine, dextromethorphan (found in some cough syrups), amphetamines, PCP, or cocaine to be used as substitutions for MDMA in the commonly manufactured tablets it is sold in. Those who actually cook up this narcotic can make it with whatever they want, putting its purity at question, and causing its potential to be lethal to be a high risk factor if mixed with dangerous materials. MDMA has been called a “club drug” due to its popular use at all night parties and in the rave subculture. It has effects similar to those of other stimulants, and it often creates a feeling of euphoric connection to others, even though it comes at a high cost.

In addition to these two main areas of research on long term effects of Molly use, there have been a number of animal studies suggesting MDMA can cause other possible neurological changes, including apoptosis and non-serotonergic neurotoxicity. So in short, using Molly can actually slowly but surely perform its own negatively charged brain-surgery on someone abusing the substance. The only trouble with the exact measurement on the long term effects of Molly use on the brain is that these studies have primarily been performed on animals.

Some studies find that repeated MDMA use may lead to subtle changes in learning, memory, attention, mood, and decision making. Long term effects of Molly use is expected to have the most influence on these cognitive function, which primarily refers to things like the ability to learn new information, speech, and reading comprehension. A list of long term effects of Molly use includes the following:

Over 100 studies on the long term effects of Molly use have found a consistent negative effect on cognitive and psychomotor function (which is the relation between cognitive function and physical movement). Even more troubling is that these long term effects of Molly use appear to be permanent, as those who were users in the past who have been without recent exposure to MDMA showed performance difficulties that were equal to or even exceeded those noted in current users.

While there is some controversy as to the addictive nature of Molly being mental rather than physical, or some dispute if it is even a reality, it is still relevant to understand that due to the nature of how the drugs Molly or Ecstasy are made with so many different chemical combinations the risk of overdose, serious health complications, or death is very much a real factor. Also it is important to consider that one of the obvious long term effects of Molly use is how it disrupts behavior and emotional responses, and how the mind and body correlate those feelings. Long term effects of Molly use can permanently damage the way the mind processes emotions and other chemical reactions in the brain.