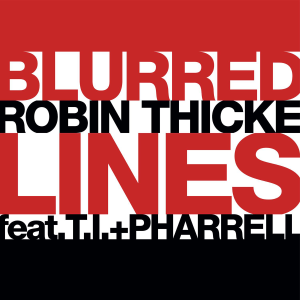 But this time, it isn’t about the lyrics – that some argued were an endorsement of rape culture; no, this time, the co-authors of the hit song are under scrutiny for allegedly copying another hit song in order to strike gold with their catchy tune. The family of legendary R&B singer Marvin Gaye contends that “Blurred Lines” is a rip-off of Gaye’s 1977 track, “Got to Give It Up.”

Apparently, in an attempt to protect their song against claims of being a rip-off, Thicke, Williams, and T.I. have filed a lawsuit.

Both Robin Thicke and producer, Pharrell Williams have given depositions regarding authorship, writing credits, and their creative process when it comes to the song in question – depositions that have been described as “absolutely bizarre.”

“Q: Were you present during the creation of ‘Blurred Lines’?

Thicke: I was present. Obviously, I sang it. I had to be there.

Q: When the rhythm track was being created, were you there with Pharrell?

Thicke: To be honest, that’s the only part where — I was high on Vicodin and alcohol when I showed up at the studio. So my recollection is when we made the song, I thought I wanted — I  — I wanted to be more involved than I actually was by the time, nine months later, it became a huge hit and I wanted credit. So I started kind of convincing myself that I was a little more part of it than I was and I — because I didn’t want him — I wanted some credit for this big hit. But the reality is, is that Pharrell had the beat and he wrote almost every single part of the song.”

After “Blurred Lines” blew up the charts, Thicke had given numerous interviews during which he accepted credit for writing the smash hit as well as openly talking about how Gaye’s music has been a big influence on his music. In fact, he appeared on Oprah Winfrey’s show with his young son and talked about how weird it was to be in the midst of a legal battle with the family of a legendary soul singer who “inspires almost half of my music.”

Robin Thicke: Real Drug Problem or Backpedaling to Save His Butt?

Thicke now says that he repeated the supposedly “made-up” origin story surrounding “Blurred Lines” because he says he “thought it would help sell records.”

He goes on to say that he hardly remembers his specific media comments because he “had a drug and alcohol problem for the year” (is that how it works? Just a year, and it goes away?) and that he “didn’t do a sober interview,” referring to the interviews he gave to such outlets as Billboard and even the one to Oprah. Thicke admits he was drunk and taking Norco — “which is like two Vicodin in one pill,” he says.

The R&B singer stated that, “I told my wife the truth. That’s why she left me.” He added that he’s been sober for many months but, toward the end of the deposition, clarified that he’s given up Vicodin but not alcohol.

Are you struggling with alcohol and/or other drugs? Or do you suspect that someone you love is struggling, despite their attempts to cover it up or dismiss it? Well, help is available. Call toll-free 1-800-951-6135 to speak with an Addiction Specialist today. We’re available around the clock to answer your questions.