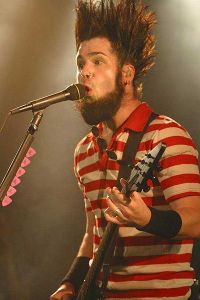 This weekend the rock and roll world was dealt another tragic loss of a talented and inspiring musician, and sadly with so little known about the detail, his death has been surrounded with speculation. The band Static-X used their Facebook page to publicly alert their fans this past Saturday night of the sudden death of the bands front man Wayne Static (Wayne Richard Wells- age 48).

“Wayne Static was the enigmatic former frontman and namesake of Static-X, who later forged a successful solo career…No additional information is available at this time.”

Papa Roach singer Jacoby Shaddix heard the new about the artist and immediately took it upon himself to label Static’s death as a drug overdose. Shaddix posted a statement on his Twitter and Instagram accounts which claimed,

“Too many musicians are dying from overdoses…I’m serious. Addiction is real and takes fools out. No one is invincible. So glad I live a sober life today. The number of friends that I have lost to addiction is crazy…I know drugs and partying are part of the ‘rock ‘n’ roll lifestyle,’ but damn, how many more gotta die…”

Although it seemed that later on Shaddix was informed otherwise, because shortly after he deleted the longer post on Instagram and has apologized via his own Facebook page. Jacorby later explained that he had only mentioned drugs and made a reference to his own recovery and the death of Wayne Static because he had heard from other people that Static’s death was drug-related. So again taking rumor as fact does not always pay off when posting to social media. Shaddix went on to state:

“Wayne, I always had respect for you and didn’t mean to disrespect you and your family like I did. It wasn’t my intentions.”

VQPR released a press statement on Sunday November 2 about the information they were willing to divulge. VQPR has represented Wayne Static in the past, and according to this source drugs did not play a part in the musician’s death, insisting in the statement from a publicist that the singer and guitarist had kicked hard drugs in 2009.

“Today is a sad day in the music industry – Front-man and founding member WAYNE STATIC of STATIC-X passed away quietly in his sleep at his home last night.
The couple [Wayne Static and Tera Wray] was getting ready to leave for a Fall/Winter tour this morning. They were to have left the night before on Halloween, but decided they would head out early in the morning November 1st.
The couple, known for partying heavy, had left hard drugs in 2009 and had not touched them since. Static’s first solo album – Pighammer – was a tribute to his new non-drug life and hoped it would help others to get clean from hard chemical drugs.
More official information about his passing will be released in the following days. This is not a drug related incident or an O.D.”

Despite these assertions by the publicist, many insist that we will not know for sure what happened to the spike-haired rock star until the toxicology reports are released.

One way or the other, the rock world has lost another musician who had a lot to give, and leaves behind a large following and many fond memories. Once we know more about the cause of death, surely this story will continue to evolve.

At this point it is not fair to speculate, but can it even come as a surprise to the outside world when we consider maybe we have lost another talented performer to drugs? Even if it was not an immediate overdose, can this death be attributed to long-term residual effects of drugs and alcohol? If you or someone you love is struggling with substance abuse or addiction, please call toll-free 1-800-951-6135