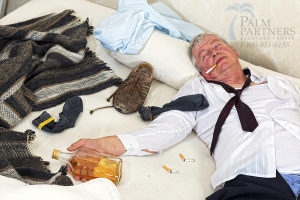 I can’t speak for everyone, but I know before I came into recovery I had always joked about the fact that once I retired I would sit around and do nothing but sit in my rocking chair, drink and watch television (more specifically old Batman re-runs). While my outlook has drastically changed having experienced active addiction and recovery, there is still a significant amount of individuals out there with the same intentions, and a recent report makes a shocking inquiry about whether retirement causes substance abuse for seniors.

According to recent polls, alcohol and drug abuse rates among adults aged 65 years or older have more than doubled in the last decade! More concerning is that those rates are expected to reach even higher numbers in the years to come based off of the growing trend.

Alcohol Not the Only Problem

That conclusion alone is part of a growing number of reports on this alarming discovery. These statistics affect about 17% of the 35 million seniors in the United States. As with years before, the substance most frequently abused by this age demographic is typically alcohol. However a report from 2013 from the Substance Abuse and Mental Health Services Administration (SAMHSA) made the distinction that illicit drug use among adults between the ages of 50 and 64 rose from 2.7% in 2002 to 6% in 2013. That may not seem like a huge increase, but given the population and issues unique to this age group, it is very troubling.

Abusing prescription painkillers and other medications are also becoming common place for seniors. It doesn’t help that older brains and bodies are more vulnerable to drug complications.

The Key Elements in Retirement

Studies have shown that retirement may have the most far-ranging effect on incipient or latent substance abuse, despite the dramatic changes produced in the aging process on the human body have a significant impact on the physical effects that alcohol and drugs have on seniors and their health.

More specifically, Peter A. Bamberger and Samuel B. Bacharach found in studies on the effects of retirement and substance abuse, it is the conditions leading to retirement, and the economic and social nature of the retirement itself that can influence this kind of behavior. The major elements of comfort that enable an individual to retire and the support they receive through retirement may lead many seniors into greater drug and alcohol use. This study by Bamberger and Bacharach was conducted for the book Retirement and the Hidden Epidemic.

Seniors may also turn to substance abuse as a means of curbing feelings of loneliness, anxiety, or plain boredom, which can ultimately create more health complications, and lead to a severe addiction. Substance abuse counselor Steven Wollman chimed in and stated,

“In retirement, there can be depression, divorce, death of a spouse, moving from a big residence into a small residence. For anyone who’s an addict, [that’s] the No. 1 trigger.”

One disturbing element that hinders the medical community’s ability to properly diagnose a chemical dependency or more serious addiction is simply a lack of time. Another contributing factor is also sometimes the similarity between many normal signs of aging, like memory loss or confusion, and symptoms of substance impairment. So with the adverse health effects brought on by old age, there are many that mimic the signs of addiction or serious substance abuse, so it is difficult for many doctors to see the red flags.

When you take the time to consider all the information, it only makes sense when appreciating the variables. Some may even accidentally over-medicate, or not notice the issues with their substance abuse themselves because they confuse changes in their own bodies with health problems. Even younger people make that kind of mistake.

The SAMHSA report “Substance Abuse Among Older Adults” indicated a collective effort between clinical care specialists, individual family members, and social service care providers to be aware of these issues and to keep a close eye on their patients or loved ones may mean to represent the first line of defense against this growing problem for seniors. With the possibility of accidental misuse of medication leading to more complicated substance abuse, or of misdiagnosing elderly addicts based on symptoms similar to issues brought on by old age, there is a real need for more information on substance abuse in regards to retired and elderly individuals.

The years in retirement are meant to be a time to relax and reflect because of the efforts put in throughout a life-time, not to suffer from a drug problem. The lives of older retired men and women deserve to be as comfortable as possible, and it is never too late to make a change for the rest of your retirement. If you or someone you love is struggling with substance abuse or addiction, please call toll-free 1-800-951-6135