This is our second installment of pictures (and gifs) that are a painful-yet-funny reminder about where active addiction led us. I’d venture to say that most of us can look back at our “before” (and “during”) pictures and laugh. At the very least, they serve as reminders of just how bad things got and can also be the proof we need that clearly shows us why we can’t drink successfully. You know, in case you misremember how bad it got. Here are 15 pics that will make you happy you’re sober.

After collecting other people’s evidence online, it became clear that drunk pictures usually fall into one (or more than one) category of the following: Doing something stupid/injuring yourself, breaking the law/getting arrested, passing out in awkward places/positions, and looking a hot mess.

We recovering alcoholics are different from people who can drink socially. We would only drink in order to get drunk. And once that happened, all bets were off. We usually ended up behaving ridiculously – and stupidly – and that often led to us causing injury to ourselves and others.

This one’s a given. Often times, we’d drink until we were in a black out and, as mentioned above, all bets were off at this point. Generally, we weren’t aware of what we were doing nor were we rational. We’d do stupid, careless, and reckless things – such as driving under the influence or causing property damage – and we couldn’t be reasoned with.

Passing Out in Awkward Places/Positions

What’s a drunken night that doesn’t end with us passing out in awkward, embarrassing, and even gross places and positions? Our nights spent drinking almost always – if not always – ended with us curling up with the porcelain throne or else half-naked in public. Hotttt 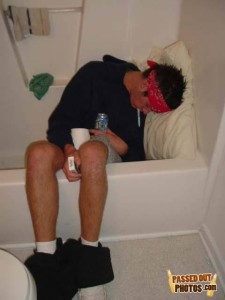 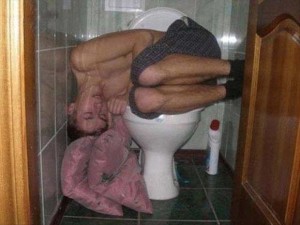 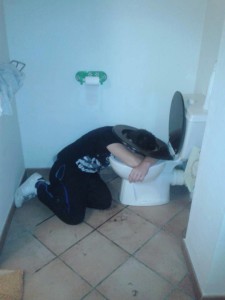 Forget the glamorous depictions in movies, when we drank, it was more like a train wreck than a sophisticated toast. TV and movies often glamorize social scenes that involve alcohol and drinking but, if we were to attend that party or wedding, you can bet money that we’d be making a fool of ourselves and ruining the occasion, too. How many of us were lucky enough to be able to make an amends for wrecking a loved one’s wedding? This is all-too-often the case for those of us who are now in recovery. 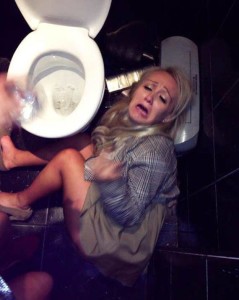 this one i just call “sad girl”

Some of these pictures and gifs are poking fun at drunk people but, don’t get it twisted – we may be able to laugh now but, if we were to pick up that first drink, things would go south, and quick. It’s cool to be able to laugh at ourselves now that we have made some progress by getting sober and working our program of recovery. But, remember to stay vigilant my friends. For alcoholism is a tricky devil indeed. If you or someone you know is struggling with alcoholism, substance abuse, or addiction, please call toll-free 1-800-951-6135.