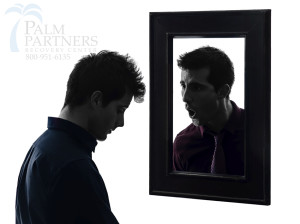 There is a phrase often thrown around that is used to quite colorfully describe many addicts and alcoholics by some of our more self-aware character flaws. Being an Egomaniac with an Inferiority Complex is a special type of personality based on practically opposite perspectives of the ego often associated with alcoholics and addicts. First, let’s look at what those two separate terms mean.

So basically, an egomaniac with an inferiority complex is someone who is obsessively preoccupied with their own unrealistic feeling of inadequacy, and it’s safe to assume they behave aggressively and impulsively to over compensate with delusions of personal greatness to mask insecurity.

Now that we can better understand the idea of the egomaniac with an inferiority complex, we can examine some of the indicating attributes that can typically be credited to this specific style of substance abuser or addict.

Often time’s people who have a tendency to exaggerate details and events do so for reasons closely associated with egomania and inferiority. They may be trying to overemphasize themselves to others to promote their worth and image, while secretly fighting the feeling of ‘less than’.

Those who openly and frequently ridicule others and put down everyone around them in ways ranging from minor insults to extreme aggressive judgment can be showing signs of being an egomaniac with an inferiority complex. By behaving this way they are trying to expose the defects in others to draw the attention off of whatever personal defect they are avoiding at the time, and doing so in a way that they feel will seem attractive to others.

Egomaniacs love compliments, and people with an inferiority complex usually find it pretty easy to belittle themselves. So when someone with both wants to get their best results, they may talk down about themselves to others to get a little extra attention and admiration. When you say how ugly you are just so people tell you you’re pretty, you are feeding the self-pity, and at the same time inviting praise that you secretly crave.

People who seem too tense or sensitive to the opinions of others also exhibit signs of egomania and an inferiority complex. If you find yourself taking everything said about you too seriously and obsessing over what someone may have pointed out as a flaw, then you are perpetuating the critical self-image. At the same time, you are being absorbed by the thought of yourself and how you can possibly appear to be better to others.

To an egomaniac with an inferiority complex losing means you ARE a loser! It makes you feel that you are less than, and it exposes your weakness or faults to others to judge you. You hate losing because it tarnishes the reputation you want people to see, and it hurts you deeper to know that you are a failure. But losing is not failing, it’s learning.

Those who have a hard time really listening to people at all and holding conversations can be showing signs of being an egomaniac with an inferiority complex. Either they are not interested enough in what it is you have to say because it’s not about them, or they are having an internal dialog obsessing about how they should respond, what their response will say about them, or what they look like while listening. Instead of being in the present they are worried or focused on themselves. Instead of listening, they just wait for their turn to talk.

The false conception of being inferior, the obsession of the negative ego, or the combination of both can be symptoms of the types of toxic behavior and character defects that make up the disease of addiction or alcoholism. Learning to understand the personality traits and how to grow out of them is a huge part of the recovery process. If you or someone you love is struggling with substance abuse or addiction, please call toll-free 1-800-951-6135