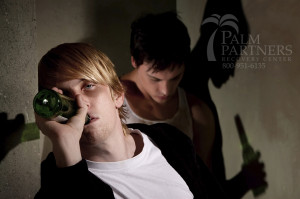 Some say alcoholism is a family affair. Children of alcoholic adults who ultimately become adults themselves typically develop some characteristics that suggest they were unable to completely grow up and grow out of the strategies they develop to cope with their problems at home. The family dynamic in the house hold of alcoholic parents is one that is often lop-sided and inconsistent, which creates a less than productive perception of how the child is expected to behave, and what they may consider in the future to be acceptable aspects of relationships. They can develop characteristics out of fear, resentment, or even admiration that will later result in hurting them or others.

Many adult children of alcoholics develop a difficulty with completing projects or commitments through until the end. They often find excuses not to finish, or they start to pre-judge themselves based on some past failures and chose not to run the risk of seeing something to the end.

Adults who grow up in an alcoholic house hold are often, but not always, neglected or rejected by a parent who is in the grips of the active disease of alcoholism. So when they grow up, they may go out of their way to impress others or at last feel acknowledged.

Sometimes the desire to feel important or valued even drives adult children of alcoholic homes to lie or manipulate situations even if the truth is equally as acceptable just to avoid the possibility of disapproval.

This is a pretty common trait among adults who have been raised by alcoholics. The tendency to be more harsh or judgmental toward themselves and their faults, real or perceived, is something many adult children of alcoholics struggle with. The ‘negative ego’ is a powerful and harmful trait that focuses a lot of ridicule on the individuals self-image or self-confidence.

This again probably has something to do with the way they are treated by their parents during alcoholic episodes.

Some children of alcoholics get a more serious and intense outlook on life based off of what their home was like growing up, and they find it difficult as adults to let go of those serious and strict attitudes and enjoy themselves. If they were not allowed to have a lot of fun as a child, or they had to grow up too fast, it only makes sense that as adults they take everything very seriously and don’t allow themselves to act irresponsible, joyful, or excited too easily.

If the relationships that a person grows up watching or being part of are reckless and rocky due to alcoholic parents, it frequently shakes the foundations of their future relationships. If an adult grew up witnessing arguments, violence, distrust, or indifference than they may eventually consider those traits to be normal in intimate relationships. This is especially true when it comes to trust or honesty. People who experience active alcoholism in their parents quite commonly see deception or manipulation, and have a tough time with adapting that to intimate relationships as adults.

Adult children of alcoholics can be very sensitive to change in their life, especially when those changes take place without their consent. Change is not always easy for anyone, but it is one thing that can be very unnerving in the case of people who grow up in a home where there is very little predictability or consistency.

A lot of people who are the children of alcoholics grow up feeling different, for one reason or another. That is probably one of the more common feelings in adults who were raised in that kind of environment, to feel like they are in some way, shape, or form different from others and will not be able to identify or blend in. If the adult develops issues later on, this has a great deal to do with Terminal Uniqueness.

Being responsible is something that goes both ways for the adult child of an alcoholic family. On both ends of the spectrum they can either grow up to be very responsible, trying to take every opportunity to improve their lives, or they can be the opposite and just expect to do little or nothing and be OK with that so long as they do not run the risk of failure.

Loyalty is something a lot of us hold very sacred. To be faithful and supportive through trials and tribulations, even when the person they are supporting is wrong or undeserving, is a common characteristic of an adult child of an alcoholic family. They may have learned this through the relationship between whatever parent struggled with alcoholism and other family members who stood up for or supported them despite the way their drinking affected others.

Alcoholism actively affects everyone in a house hold whether it is noticeable or not. People who live with alcoholics often tend to be deeply impacted by the drinking and behavioral patterns of the alcoholic, and children suffer the most in ways they may be more harmful even later in life. If you or someone you love is struggling with substance abuse or addiction, please call toll-free 1-800-951-6135