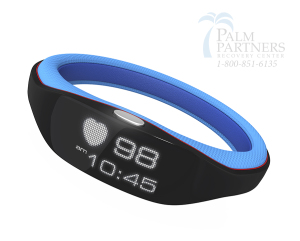 Sometimes there are innovations made that change things up quite a bit in the world of young people and drinking. This is one I wish that I had when I was younger! I mean seriously, it could have saved me and my friends a lot of embarrassing situations, not to mention hang-overs and other more severe consequences. But then it brings to question, in an invention like the Vive wrist band going to protect young people, or does it somehow rationalize destructive behavior? Either way, the details are pretty interesting, but it could be argued both ways.

Vive is a wristband developed by students from the University of Washington that is designed to show you and your friends how drunk you are by monitoring alcohol and dehydration levels in your body. The designers of the Vive believe that this new technology could help reduce the likelihood of sexual assault and other potential harms most commonly attributed to heavy drinking.

The Vive works using a transdermal alcohol sensor which measures Blood Alcohol Content (BAC) levels through the skin. This is the same as the bracelets DUI offenders are sometimes forced to wear by the courts in order to monitor their alcohol consumption. The exciting difference is that the Vive one can also monitor unusual changes in motion. So if you were to pass out or get injured, it would notice.

This is a great help because it has the ability to alert your friends if you are either too intoxicated, or if you are physically effected in some cases. It does this by checking in with you periodically, and if you are unresponsive, it alerts your friends on their own wrist bands.

In their informational video the wristbands are shown, which could easily pass as any other sort of beaded bracelet or accessory, and do not seem uncomfortable to wear. It even uses GPS location to let people track you if they lose you at a party.

Another very interesting aspect about the Vive that will probably add to its popularity is that it actually has its own social media-like capabilities! The Vive allows users to connect with each other and check in on their friend’s levels of drunkenness on a scale from “just a few drinks” to “completely wasted.” This is developed so that if you find yourself out with that friend who drinks too much and puts themselves in potentially dangerous situations, or if you have been that friend, it lets you keep track of each other

This part of the Vive can be a huge innovation, because it helps individuals who drink to try and monitor themselves, as well as helps friends keep track of how intoxicated the others are. This could not only keep people from drinking to the point of alcohol poisoning or other serious health issues, but it could also cause a drastic reduction in dangerous and devastating situations like drunken driving and sexual assault.

You can even sync the Vive with new friends and use the social media technology to stay connected with them afterwards.

The Bad Side of the Vive

There are plenty of pros, as far as health and safety are concerned. But what about the cons? Well for one some people might say that this new device simply promotes alcohol consumption, and even rationalizes over-indulging in alcohol based on the idea that someone may think they have a fool proof safe-guard from the dangers of excessive drinking.

People may justify drinking more because they feel if they were at risk, their wrist would let them know. But what if that device is not as reliable for everyone? Or what if people ignore it all together? What if people even went as far as misusing the technology to know when people are drunk enough to exploit them? Or for the recovery community, will this add a new element to people who attempt controlled drinking?

At the end of the day, I think that Vive is an awesome idea. Although there may be some questions as far as how sure can it be that it works, or how effective will it be on alerting friends and staying connected, or how can we be sure this power won’t be manipulated, it is certain that this is a step in the direction of making technology that will help friends keep an eye on their drinking, and on themselves, and deter some risky behaviors. It may even do some good to prevent social drinkers from developing serious drinking habits, physical dependence, or all out alcoholism.

Every once in a while technology starts to show signs of making vast changes in the way we can raise awareness and promote prevention of addiction and substance abuse. While things like the Vive bring new hope for some, alcoholism and addiction require more action than wearing a wristband. There is help and hope for those who suffer. If you or someone you love is struggling with substance abuse or addiction, please call toll-free 1-800-951-6135