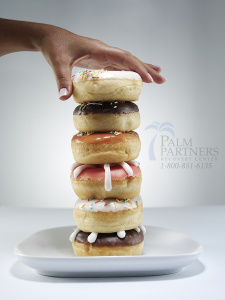 It’s a difference between two words – two words that seem almost interchangeable – although, that difference is all important when it comes to a certain type of eating disorder. Not the kind that has to with restricting food or caloric intake; it has to do with over-indulging in food, or over-indulging in a type of food. This is the main distinction between eating addiction and food addiction, respectively.

If you think you have one of these issues, here’s a little test for you:

Fill in the blank: “After a tough or emotional day, I will sometimes go home and eat ______ until I’m sick.”

Depending on how people answer this question, an emerging debate becomes apparent: regarding obesity and food addiction. Is food addiction a legitimate disorder? And, should food industries be held accountable for intentionally developing extremely palatable sugar-salt-fat bombs that can actually override the brain’s signaling that we’re full?

Or, is it more accurate to say that the behavior of overeating is an ‘eating addiction’ — a disordered relationship to all foods that requires action on the part of the individual, much like recovery from drugs?

In fact, Ashley Gearhardt, Ph.D. to the Huffington Post compared the struggles of people with food addiction to alcoholics trying – and failing – to keep their habit under control.

“Sitting in the room with clients, you never hear people say, ‘Oh my god, I came home after a hard day and I was just craving broccoli and cauliflower so bad that I had a massive binge on these vegetables,’” said Gearhardt. “That’s part of the reason I think it’s important to recognize that not all food is problematic — it’s a certain class of foods that people seem to struggle with the most.”

She added, “Often they will try to have their own rules, like, ‘I’m going to try to not drink until after 5,’ or, ‘I’m going to try to drink water between each drink.’ But when they start drinking, the intensity of the alcohol makes it really hard; something similar might be happening with food.”

It might be too early to say for sure but, food addiction research has its obvious appeal. The model reveals a comprehensive concept of the “toxic food environment” in which we live currently and is compelling in its assertion that the increasingly prevalent and powerful processed food industry is closely linked with growing rates of obesity , especially morbid obesity, which is defined as a body mass index over 40.

“’Food addiction’ has been implicated as a potential contributor to the obesity epidemic,” wrote John Menzies, Ph.D., a University of Edinburgh researcher who studies the neuroscience of hyper-palatable foods in an email to HuffPost. “However, there is no association between diagnoses of addictive-like eating and body weight.”

That is, some people of what’s considered to be normal weight seem to have signs of a so-called food addiction, while there are some obese people who have normal, healthy relationships with food. It’s those relationships, not the food itself,  that should be the focus of analysis and intervention, said Menzies.

New York Times reporter Michael Moss a book, Sugar Salt Fat; in a series of eye-opening and, at times, shocking descriptions, Moss details all the tricks of the trade that the processed food industry employs in order to find the perfect combination of sugar, salt, and fat, making their food irresistible as well as eliciting hardcore cravings.

“The food industry hates the A word, addictive, because it cuts too close to their efforts to maximize the allure of their products,” Moss wrote in an email to HuffPost. Yet even he is reluctant to use the “a-word” when it comes to describing the effect processed food has on our brains.

“I’ve been shy about using the word myself when it comes to food, since narcotics can have such a tougher grip on individuals,” wrote Moss in an email to HuffPost. “But obesity and diabetes is a vastly greater health issue than drug abuse, involving vastly greater numbers of people, and it’s important to remember that the formulas used by the processed food industry to get us to not just like their products, but to want more and more of them, are just part of their strategy.”

However, Menzies argues that there’s just not enough evidence to prove that a certain food can be considered an addictive substance like cigarettes or alcohol. He writes that it’s more appropriate to regard chronic overeating as an eating addiction instead, based on his review of almost all the studies on the subject that have been recently published in the journal Neuroscience & Biobehavioral Reviews.

“‘Eating addiction‘ shifts the focus away from the food itself to the behavior,” he wrote. “It emphasises that we need to look carefully at people’s relationship with food and understand how people make their food choices.”

Struggling with a substance abuse disorder, alcohol or drug addiction, and/or eating disorder makes life a lot tougher than it really is. The good news is that there is specialized treatment that can help you on the road to recovery so that you can start living life to its fullest. Call toll-free 1-800-951-6135. We can help. You are not alone.