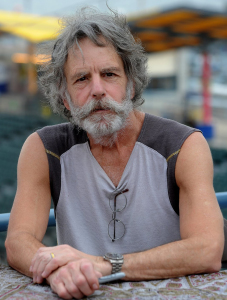 Wait a second, so you’re telling me a member of the Grateful Dead the band did drugs?! That is just too crazy to be true, right? Well either way it was something of a shock when Bob Weir, the Grateful Dead rhythm guitarist hinted at a painkiller addiction in a recent interview he had given in a inclusive magazine article.

This past August many ‘Dead-Heads’ and other fans were in for a little bit of a letdown when Weir suddenly canceled tour dates for his solo band, Ratdog. The cancelation extended well into the next year, and subsequently many feared that he might be suffering some serious medical issue. As a pleasant surprise it turns out that he may have been in the beginning stages of trying to clean up his act. In his interview he said,

“I had to take painkillers for a shoulder issue for a number of years, and that’s something I’m still dealing with,”

Weir had actually first suffered his shoulder injury in April of 2013. He had been performing at a Furthur concert with fellow Grateful Dead artist and famous bassist Phil Lesh. At one point in the show Weir had collapsed mid-song. But like any good rock-star he took it in stride, and continued to perform in a chair. However, despite his resolve Weir canceled the next day’s concert.

The interview touched upon many subjects, and of course drugs were no stranger to this side of the conversation. The Grateful Dead guitarist even included another recent disclosure that he had on occasion to carried some of Jerry Garcia’s heroin around for him while the band was on tour. So obviously opiates were not off the table or out of the question at one point. Heroin may have been a different brand in a different time, but prescription painkillers cut it pretty close.

Weir went on to explain this kind of thing as a regular routine for him in the glory days of the Dead.

So at one point Weir was not ashamed to admit his involvement in this type of method of ‘painkilling’ with heroin and opiate pain medications being so closely related. Weir elaborated on his experiences using drugs with his old band mate, and what feelings he closely associated with the aspect of their relationship on a personal level. He said,

“It was fun to go into his world on a given evening after a show, but it’s not a place I found I wanted to stay—or at least that part of his world. It was fun going into that little corner of his world where he didn’t let other folks in. A place to visit but you wouldn’t want to live there.”

At this point if Weir has sought professional treatment remains only a speculation, but he did step outside the typically stigma of the type of rock-star he is to offer a bit of advice to today’s youth about drugs,

“Bottom line: you’re better off straight. Stay the hell away from heroin; it’ll take you out. It’ll ruin your life. Meth, the same thing. Cocaine—stay away from cocaine and any of the addictive drugs. Try not to take sleeping pills in your life. If you have a chronic pain issue, better to figure out how to deal with it other than with pain medication.”

So as a man of such a past to be stepping outside what may be expected of him, by many who assume what a man in band like Grateful Dead is, Weir took the opportunity to suggest another way for those who have yet to cross the line he has admittedly dabbled with for some time now.

Whether or not he was abusing them, or had developed a more serious addiction related to his painkillers, is a mystery but regardless sometimes it seems the world could use more rock-stars willing to stand up and speak out against drug abuse from their own experience. Another great rock star trying to spread a different message.

Too many incredible and talented people have suffered and been claimed by the disease of addiction. Not just musicians and actors, but every day people who develop serious drug or alcohol problems slip through the cracks and don’t ever find their way back. Prescription painkillers are one of the greatest offenders, and they claim more lives now than ever, but there is always a way out. If you or someone you love is struggling with substance abuse or addiction, please call toll-free 1-800-951-6135