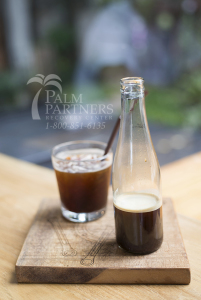 So we have already discussed how some people believe drinking coffee excessively should practically be considered a relapse. The mind and mood altering properties of coffee can be debated and analyzed all day, and opinions will still vary. But now there is a new version of the most popular beverage in recovery that is going to push that even further. This new form of caffeinated water called Coffer actually contains alcohol, so will it be regulated, and will it be off the menu at Starbucks for the recovery community. Despite decades of innovation in the way coffee is sourced, prepared, and sold, the addition of bubbles is an innovation that has largely been ignored.

Thanks to an assorted effort of coffee nerds and roasters from different walks of life who recognize carbonated coffee as an idea that’s time has come and is about to his the mainstream coffee market, anyone who’s opened a bottle of the espresso soda like Manhattan Special and had the thought that carbonated coffee is due for an upgrade, we may be seeing just that in a new expression of the espresso, and it is gonna have a couple recovering alcoholics curious about if it will constitute a relapse?

Adding Fizz to the Biz

The question that this new coffee technology may pose to the sober community is that the tech used to carbonate coffee is similar to the process used to carbonate something like beer. There are a few variations, but all trying to add a little fizz to the drink:

Beyond all of these companies and their changes in product, the start-up company Coffer based out of Austin actually officially launched this year, and this time they are doing something entirely unique, and something that makes it an exciting but curious project.

Kevin Chen, the founder of the Coffer empire, says the company traces its heritage back to the moment when he pumped carbon dioxide into a batch of cold brew coffee, something that was parallel to putting a liter of leftover coffee through the SodaStream.

Chen told one particular coffee blog he had not been pleased with the outcome of him trying to force carbonation. Chen later explained the large bubbles made for an unbearably bitter drink. In an attempt to keep hope alive he decided to try a new way, eventually striking a creative gold mine of a moment, some would say: fermentation.

Cold brew gets mixed with some cane sugar and a type of yeast. Like Champagne or hard cider, it then gets fizzy. Now when also describing it, it is important to note that they estimate it is perhaps a tiny bit alcoholic. Now that may be an attempt to make it seem innocent enough, but any real alcoholic can acknowledge that they is really no such thing as a ‘tiny bit’.

The rest of his process Chen is keeping close to the chest, so there are several ingredients and processes unable to share. Regardless the results of the fermentation are immediately apparent when you pop a bottle of Coffer. The taste is only vaguely sweet, but is it worth it?

When the Coffer is very cold, the drink resembles homemade beer or soda more than it does traditional coffee! This begs to question, are those who drink Coffer going to not only be drinking something that has “a tiny bit” of alcohol in it, but also tastes like a homemade beer?! The name of the product itself was created as a reference to the fermentation of the beverage. Coffer is taken from Cof-fee and Fer-mentation!

Heavy hitters of the industry were in attendance at the Specialty Coffee Association of America’s event, where Coffer made its big debut in April, and where it grabbed a lot of attention. As of now, though, Coffer is still only available in a handful of Texas mini-marts and specialty shops, although in the next 4-6 Chen is hoping for national sales. So there is still time for alcoholics and addicts to evaluate and assess the situation, before someone slips a batch of Coffer into the meeting and screws up the whole thing.

One way or the other, it is probably safe to assume that Coffer is going to cause some mixed opinions on the relationship between coffee and relapse in recovery. Either way, alcoholism and addiction are very real, and most who have suffered would likely not risk it for a cold fizzy coffee because not everyone has the opportunity to get help. If you or someone you love is struggling with substance abuse or addiction, please call toll-free 1-800-951-6135