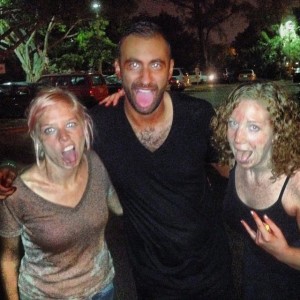 Covered in Blood: the author with some friends after a Gwar show

Looking back, I realize that I’m pretty lucky I got to go see GWAR (also written “Gwar”) perform back in November of of last year. It was to become one of their last shows before front man, David Brockie – aka Oderus Urungus – was found dead in his Richmond, VA home in March.

The Virginia medical examiner’s office has since found that the cause of death was due to an accidental heroin overdose. Brockie, the front man for the heavy metal band, was 50 years old at the time of his death.

It was one of Brockie’s bandmates who found him dead in his home on a Sunday evening.

“It is with a saddened heart that I confirm my dear friend Dave Brockie, artist, musician and lead singer of Gwar passed away,” the band’s manager, Jack Flanagan said in a statement released the next day.

At the time of the discovery, evidence found in Brock’s house pointed to a possible drug-related cause of death. A toxicology report, a procedure that can take up to six weeks, was ordered to be performed by the Virginia Medical Examiner in order to determine the exact cause of death.

Brockie was one of the founding members and remained a constant in the Grammy-nominated “shock rock” band, which was founded back in 1984. In fact, Brockie was the last original member. Prior to his passing, GWAR lost another member suddenly back in 2011 when 34-year-old lead guitarist Cory Smoot – aka – Flattus Maximus, was found dead on the band’s tour bus. His death was caused by heart failure.

Along with some fellow students at Virginia Commonwealth University, Brockie formed the outrageous thrash metal act which also incorporated social and political satire and is known for its comically grotesque costumes, stage antics and vulgar lyrics.

When I attended the show in November, I was prepared to be sprayed with copious amounts of fake blood, which Gwar had become notorious for doing (pictured above).  I was even one of the few lucky concert-goers who were “sacrificed” to the “meat grinder” – another part of the show that had become a GWAR tradition.

Brockie told Style in a 2012 feature story “We were and still are provocateurs. We’re just a bunch of guys with warped senses of humor spit balling the most evil ideas that we could think of, to hold up a twisted mirror to the culture.”

Former Gwar bassist Mike Bishop had this to say about his fallen bandmate: “[Brockie was] one of the funniest, smartest, most creative and energetic persons I’ve known. He was brash sometimes, always crass, irreverent, he was hilarious in every way. But he was also deeply intelligent and interested in life, history, politics and art.”

GWAR released its latest album in 2013 and had recently toured Australia and Japan.