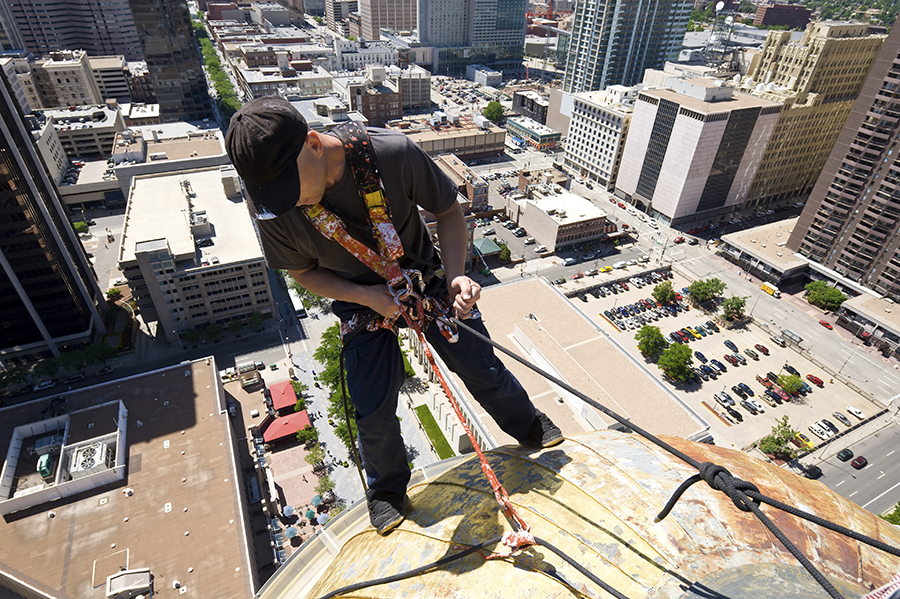 Some people believe you have to reach for the roof if you want to raise awareness about the disease of addiction, and the roof of SandRidge Energy’s 30-story building may seem extreme, but many are ready to go to new heights. So on April 29, more than 80 Oklahomans will be connected into rappelling gear and descend the high-rise. This daring challenge is just part of the “Shatterproof” movement that is bringing awareness to one of the nation’s most devastating and most stigmatized health problems: addiction.

Shatterproof is a national organization dedicated to bringing awareness, funding research and de-stigmatizing the disease of addiction with education. There will be 28 Shatterproof Challenges in cities across the United States this year.

Many of the Oklahomans participating have struggled and overcome their own addictions, and others have watched a loved one plunge deep into addiction. Some have lost loved ones to drugs and alcohol, and to other consequences brought on by the circumstances of addiction.

Oklahomans are encouraged to take part in the event, and even to form teams to rappel in The Shatterproof Challenge. Registration to rappel is $55, and participants have committed to raise at least $1,000 for the cause.

All of the money raised by this event will be used to:

Gary Mendell is the founder of Shatterproof, and on October 20, 2011 his son, Brian Mendell, took his own life at the young age of 25 after struggling with drugs and alcohol for 10 years. When his son died, Mendell felt shattered, and he said he didn’t even leave his home for two months.

Mendell eventually decided to educate himself about addiction, and through that he apparently found a calling: to create an organization that would bring as much attention as possible to the country’s massive addiction problem. Mendell said in a recent interview,

“When Brian was alive, I couldn’t tell you how many people in this country were addicted,”

But since the tragedy you can bet his knows that number now. 25 million Americans over 12 years old actively addicted, averaged out to 1 in 10 Americans. According to a recent study conducted by Columbia University that was published in the journal Injury Epidemiology, the drug overdose epidemic in the United States will actually peak in 2017, at about 50,000 annual deaths.

Mendell is especially committed to children becoming better educated and prepared to resist the temptation of drug and alcohol use early, since some statistics show that 10% of the addicted population is children as young as 12, showing a real need for drug abuse information for younger people.

Mendell hopes to make the Shatterproof movement a national spotlight, and get as much word out there as possible to inspire change in stigma and treatment.

Shatterproof has so far included a long list of accomplishments in it’s short time actively working in communities across the country. So far they have enlisted over 70,000 people and raised $9 million for the cause, even assisting in passing legislation for programs to combat addiction such as expanding access to naloxone, the heroin overdose antidote.

Just this month Shatterproof had 2 events here in south Florida including Rappel Miami on April 2 and Rappel West Palm Beach on April 4. On the 23 of this month there is the Rappel ASAM Annual Conference in Austin, Texas and then there are several events planned through the rest of the summer until September. You can go online to see the full schedule, get details about the location and event, and register to get involved.

Out of all the mission statements that Shatterproof has made, one of their primary focuses seems to be shattering the stigma. A huge part of waking the world up to the reality of addiction as one of our biggest health concerns will mean people seeing addiction and substance abuse for what it is, and not the stereotypes and dramatizations we see in the media. Too many families are taken by surprise because the addict closest to them isn’t what they expected, and Shatterproof is another opportunity to participate in something exciting to change that perception and share that experience.

Stigma is probably one of the ugliest expectations we will ever fool ourselves into trusting, and it often times keeps us from knowing how we can help the ones we love before it is too late. If you or someone you love is struggling with substance abuse or addiction, please call toll-free 1-800-951-6135