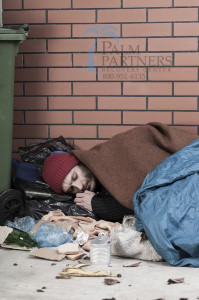 There are several common myths and misconceptions about addiction that run amok, and these are passed around by not just those who are lucky enough to be non-addicts but, by addicts, themselves. The problem with this is two-fold: it derails society at large from truly understanding the nature of the disease, which then perpetuates these negative stereotypes, and it deters people who are struggling with addiction from seeking help, because they believe these terrible things to be true about themselves. Here are the 13 most common addiction stereotypes.

I think it’s quite common for people to hear the word ‘addict’ and then immediately envision a homeless person living in squalor behind a Dumpster or else in some abandoned building. In reality, actually, there are many of us who were ‘functional addicts’ – we had good jobs, homes, cars, married with children, even pillars of our communities.

This stereotype is grossly detrimental to the cause of raising awareness about the disease of addiction and it keeps many people under a heavy veil of denial about their addiction. In my experience as a functioning addict, I really didn’t believe I had a problem because my life didn’t “look” like that of a junkie’s.

If you are an addict, you’re a bad person. At least, that’s how most of society views you. And we tend to view ourselves that way, too. Not realizing that there’s much more to it than that. And, in fact, that it has nothing to do with our morality and who we are as a person. Many of us were desperately trying to cope with unresolved trauma, finding solace in drugs and alcohol. This leads us to the next most common stereotype on the list.

#3. Addiction is a choice

There is still much contention over whether addiction is a disease or a choice, even though the medical community had begun to recognize addiction as a medical condition about half a century ago, there are many prevailing beliefs that alcoholism and drug addiction somehow has to do with the person and their choices rather than their brain chemistry. There are findings that support the theory that those who have addiction are predisposed by certain inherited genes.

#4. People who are addicted to say, heroin, can still drink

Many people, including addicts, misunderstand the nature of addiction, and seem to think that it’s the drug and not the disease. In my experience as someone who works in a treatment setting, I hear many clients sharing that they’ve been to treatment more than one time and that each time, it’s been for a different drug.

So, for example, the first time might have been for alcohol but they return with a “problem with benzos.” The problem is not the substance, itself. The problem lies within the brain. Therefore, someone with the disease of addiction cannot simply be rehabilitated from one substance and go on to use another one “successfully.” Introducing such chemicals into the brain kick off a chain reaction of cravings that lead to obsessions that ultimately lead to a compulsion to drink or use.

Although many of us have childhood trauma in our background, it is not a requirement for developing addiction. And in fact, in my experience, many people I meet who are recovery share that their childhood was ‘typical,’ even happy.

Addicts just need to stop hanging around bad people who do bad things. That’s another common addiction stereotype. People want to blame their loved one’s friends or boyfriend or girlfriend for their drug problem. Again, addiction is a disease and therefore, no one can cause you to be an addict. On the other hand, when you get clean, you will have to change the people, places, and things with which you interact because these can derail your recovery.

#7. You can stop if you really wanted to

False. Most people in active addiction eventually reach a breaking point where they want to stop; they really, genuinely want to stop. They just can’t. That’s what having an addiction is like. It’s a prison – you can see through the spaces in the bars to the outside world but, you can’t find the way out there.

#8. You have nothing to contribute to society

I think a lot of people consider recovering addicts to be somehow broken; that they’ll never amount to anything. And this goes for people recovering from addiction, too. This couldn’t be further from the truth. I know so many people in recovery who are out there, doing big things; and basically just killin’ it. We’re talking professionals, business owners, artists, musicians, and so on.

#9. Some drugs are better than, or not as bad as, others

There’s the whole cocaine vs. crack; painkillers vs. heroin mentality where one drug is not as dirty as another. For those who are non-addicts, it’s definitely a look-down-their-noses at you sort of thing. And for addicts in recovery, it’s a beat-myself-up kinda thing.

Here’s a little anecdote: when I got clean, my mom asked me about the drugs I did. She knew I used heroin and that I was an IV user. She sort of leaned in and asked in a hushed voice (even though we were home by ourselves), “But you didn’t do crack, did you?” I answered her honestly, which meant that I told her that yes, yes I did do crack. She looked appalled. To which I replied, “Mom, I SHOT HEROIN…WITH TOILET WATER. Why is crack so much worse than that?” I mean, really, what’s the difference?

Likewise, people want to make an issue over method of use. I don’t know how many times I hear clients say something to the effect of, “I started with painkillers and then started using heroin but, I didn’t shoot…yet, thank god!

When it comes to addiction, though, it really doesn’t matter what you use or how you use it. You have a disease for which there is treatment and help. Recovery is possible. The details don’t matter.

Some addicts are prone to violence when under the influence of drugs and alcohol. That can be a side effect of the substances and their influence on the individual’s brain chemistry. But not all addicts are violent. I wasn’t. I was mouthy and emotional. But never violent.

#11. They have a criminal history and will have regular contact with the police

It’s true, addiction can lead to criminal activity. A lot of people who struggle with addiction also have legal issues or have had legal issues in the past. But that’s not always the case. Especially in the case of the functional addict, who generally never sees the inside of a jail cell. Not all addicts are criminals.

#12. They steal money and belongings from family and friends

Again, many addicts resort to desperate measures in order to support their drug addiction, including stealing from friends and family. Again, this doesn’t apply to all addicts.

I think one of the common addiction stereotypes out there is that addicts are young people. When, in fact, we’re seeing a growing trend of substance abuse and addiction among the Baby Boomer generation. Addiction is a non-discriminating disease. It affects people across gender, class, age, and ethnic lines.

Did you find any of this surprising? Has it made you consider that maybe you have a problem with drugs or alcohol? Maybe you’re worried about a family member or other loved one. The good news is that help is available. Call us toll-free at 1-800-951-6135 to speak directly with an Addiction Specialist. We can answer your questions and give you resources. Addiction affects as many as 1 in 3 people. You are not alone.