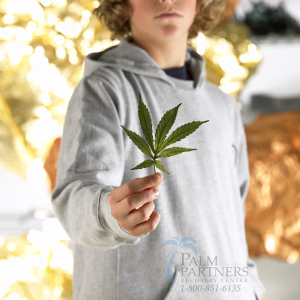 People believe weed is harmless right? Probably the most common cop-out response from anyone who has an argument about the effects of marijuana on an individual using it would be that it is ‘just a plant’. So is it a credited fact or just the popular belief that there are no real issues with marijuana? According to a research team focused on proving the potential harm of marijuana, it has come to light that for young people it may not be as safe as most assume it to be. In a new study published in the journal The Lancet Psychiatry frequent marijuana use in adolescence could actually negatively impact teens as they grow into young adults.

So is this a legitimate concern? Some would say that judging by the numbers this study has accumulated that it most definitely needs to be looked into. Others would state that this study is taking the information and laying it out backwards in attempt to point the finger at pot-enthusiasts. Either way, more people should probably at least entertain the idea of the dangers of using marijuana could pose for young people.

In this recent study researchers came to several conclusions that suggest there is a accountable impact on young people who use marijuana at a young age. This research suggests adolescents who use marijuana daily:

Dr. Edmund Silins, the study’s lead author, was very confident in these claims, and stated,

“The results provide very strong evidence for a more direct relationship between adolescence cannabis use and later harm. The findings are particularly timely given the growing movement to decriminalize or legalize cannabis because this has raised the possibility the drug might become more accessible to young people.”

Setting the Tone of the Study

The team of Australian and New Zealand researchers conducted the large meta-analysis by combining individual-level data on up to 3,765 participants who used marijuana in order to learn more about the link between frequency of marijuana use in adolescence. In this study adolescence are defined as anyone under the age of 17 years old up to seven developmental outcomes ending at the age of 30 years old to determine how these teens would grow into young adult life. The study, which controlled for 53 potentially contributing elements including age, sex, ethnicity, socioeconomic status, other drug use, and mental illness, yielded clear and consistent associations between frequency of marijuana use and most of the seven developmental outcomes. The researchers focused on whether the teens studied had:

“Our results provide strong evidence that the prevention or delay of cannabis use is likely to have broad health and social benefits. Efforts to reform cannabis legislation should be carefully assessed to ensure they reduce adolescent cannabis use and prevent potentially adverse effects on adolescent development.”
As determined by the 2013 Monitoring the Future survey conducted in the United States last year, approximately 7% of high school seniors are daily or almost daily marijuana users. So there is a very large population that should be taken into account as far as whether the claims made by this resent research should be taken seriously.

Contrary Opinion
But some like Mason Tvert, communications director of the Marijuana Policy Project, refused to take the study at face value. When reached for comment, Tvert was very opinionated about the claims made by Dr. Silins and the research team stating,

“The article expressly states that there remains no evidence that using marijuana causes depression, suicide or dropping out of school. It simply shows that teens who are prone to developing these problems are more likely to have used marijuana.”

So is it fair to say that the research is just creating a scare tactic out of information that cannot be placed solely on the shoulders of marijuana? Or could the blame be somewhat justified based on the averages determined through this survey?

Either way I believe it would be a fair assumption that weed should be placed under a magnifying glass and out of reach of children until there is more than enough knowledge available as to what it can do to adolescence. After all it should be the type of situation that is examined as ‘better safe than sorry’ as is with alcohol and cigarettes. Any substance probably has a fair amount of potential to leave a lasting impression on a young person, so it should be reserved for those who have had more of a chance to develop if it is decriminalized in any form.

Some people don’t believe in the idea of a gateway drug. Whether or not you think marijuana should be legalized or not, it is important to understand the impact drugs of any form can have on an adolescence and that addiction stems from abuse of any drug. If you or someone you love is struggling with substance abuse or addiction, please call toll-free 1-800-951-6135