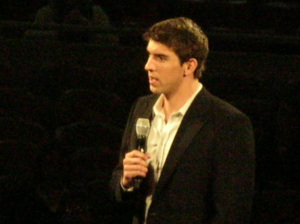 Michael Phelps is pretty well known for his record-breaking accomplishments as an American Olympic swimmer, for being the most decorated Olympian of all time with a total of 22 medals, 18 of which are gold which is double the runner up, and for massive amounts of effort put forth into his philanthropy endeavors to passionately support the success of those around him. Unfortunately, as of this past week Michael Phelps is facing a second DUI charge that when coupled with other past problems with substances and drunk driving may cost him quite a bit, but hopefully it is waking him up to the realities of substance abuse.

Phelps Past DUI and Pot Problems

This is already Phelps second DUI, the first being back in 2004 when he was 19 years old. Back at the time of this original offense he struck a plea deal with the state prosecutors and pled guilty in exchange for 18 months of probation. This came before his athletic career as an Olympian had even begun to make headway, so there was not much coverage about the story. It was dealt with accordingly, and Phelps went on to serve his probation and take part in the games later down the line.

During the 2008 Olympics, Phelps was questioned by the press as to suspicions that perhaps his amazing accomplishments were actually “too good to be true”, and referred to unsubstantiated gossip that Phelps might be taking performance enhancing drugs. But Phelps met these accusations in good form, and reminded reporters that he had signed up for Project Believe, a venture by the United States Anti-Doping Agency in which the U.S. Olympians were given an opportunity to volunteer to be subjected to drug testing in excess of the World Anti-Doping Agency guidelines, so he had signed up and went out of his way to be tested for drugs more than the average athlete. During the Olympic Games, Phelps passed all nine tests that were administered to him.

But that would not be the last time he had to face allegations and bad press over substance use. Michael Phelps is also known for the ‘water-pipe scandal’ from back in 2009 when a photo surfaced of him holding a pipe used for smoking tobacco or marijuana, and he admitted to the authenticity of the photo and apologized publicly.

Media sources indicated through reports that Phelps was hauled off to a Maryland police station this past Tuesday where he was booked for another DUI. Phelps was eventually released, but so far those charges have stuck. Police officials stated that Michael Phelps was charged with multiple offenses including DUI, excessive speeding and crossing double lane lines.

According to sources in the Maryland Transportation Authority Police, Phelps was arrested at approximately 1:40 a.m. Tuesday and charged with driving under the influence after an officer clocked Phelps’ white 2014 Land Rover speeding through a 45-mph zone at the excess of 84 mph. Police said that while driving he crossed double yellow lines inside the Fort McHenry Tunnel on northbound Interstate 95, which was just one indicator he was intoxicated. It was also stated that he completely bombed his field sobriety test, and upon further inspection the officer found his Blood Alcohol Content (B.A.C.) was almost twice the legal limit!

Michael Phelps has officially issued a statement on his DUI arrest in Baltimore, Maryland, saying he takes “full responsibility” and is sorry he let everyone down. The following are the posts that Phelps put up on his Twitter that make up the statement he issued to the public Tuesday:

“Earlier this morning, I was arrested and charged with DUI, excessive speeding and crossing double lane lines.”

“I understand the severity of my actions and take full responsibility.”

“I know these words may not mean much right now but I am deeply sorry to everyone I have let down.”

With this Phelps seems to be making an attempt at picking up the pieces again after a scandal involving him and substance abuse. Phelps had announced in April that he was coming out of retirement to compete for Team USA in 2016 Summer Games, but many are beginning to wonder if he will be losing out on more sponsorship now that he is in the news again. He had lost his previous pay-roll with Kellogg’s after the whole ‘water-pipe’ incident, and many are debating whether more companies will jump ship to avoid being associated with his brand. Others however insist that 22 medals for America is more than enough to sweep these 2 strikes under the rug. But should it be? Or should more be done to make sure these issues are taken more seriously?

Olympic Athlete or not, someone who has found themselves in trouble for DUI’s more than once should probably consider taking a real look at their drinking, and possibly drug use if that is a factor for them. Putting lives at risk, others and you own, in order to drink and use drugs is just one indicator of a more serious problem, and hopefully you get the help you need before it is too late. If you or someone you love is struggling with substance abuse or addiction, please call toll-free 1-800-951-6135. We want to help. You are not alone.