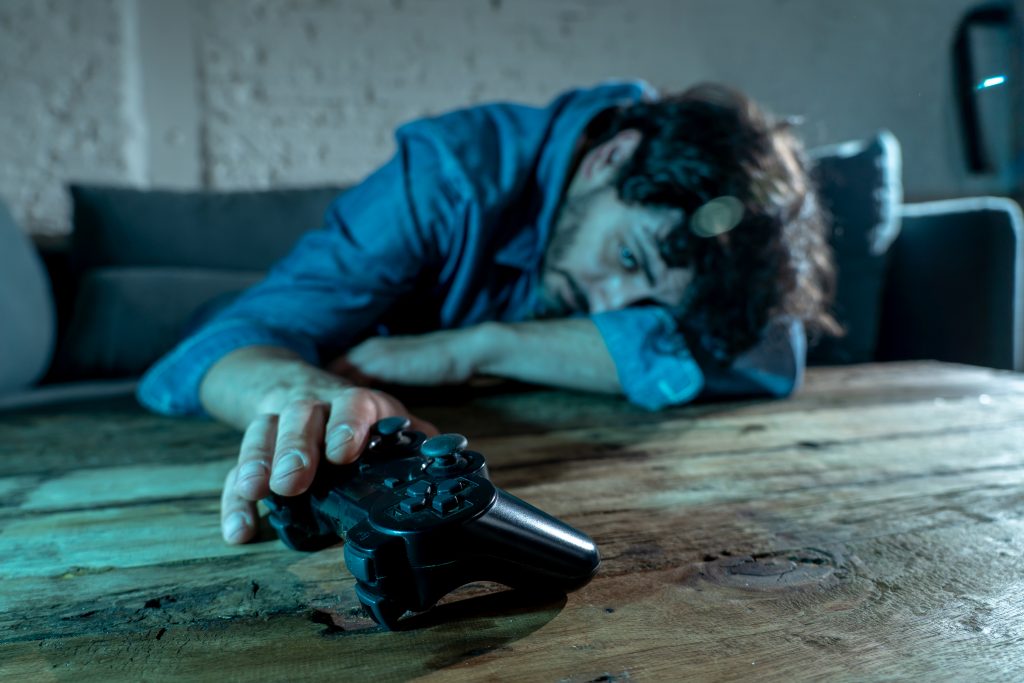 Right away, there are going to be some people reading this who (like me) love to spend more than a few hours staring at a screen, smashing buttons on a controller. Before you assume we are saying video games and opioids are the same- we are not. But what we are doing is looking at what they do have in common.

Recently, the World Health Organization (WHO) announced it would be classifying gaming disorder as an official mental health diagnosis. For years, mental health professionals have recognized behaviors they thought proved video game addiction as a serious problem. With this new stance on video game addiction, there comes plenty of controversy and contention. Some people argue that this is an unfair characterization of avid gamers, while others are truly convinced there is enough evidence to support the need for gaming disorder intervention.

So, without taking a side, let us look at the new concept of video game addiction and gaming disorder while comparing it to another well-known addiction- opioids.

WHO Decides When Gaming Is Too Much?

As of 2016, WHO has 191 member states and other countries that have been granted observance status. Despite the various differences in language, culture and medical traditions they all seem to agree on common definitions of diseases. These outlines are included in the International Classification of Diseases (ICD). WHO is an agency of the United Nations, and specializes in international public health.

According to the most recent edition of the ICD, the criteria for people who may suffer from a video game addiction include those who allow gaming to negatively impact:

The WHO definition of gaming disorder is pretty broad. This kind of ambiguity could lead to anyone who just spends a little too much time playing Xbox on the weekend to being labeled with a video game addiction. Thankfully, the American Psychiatric Association has proposed a set of slightly more detailed diagnostic criteria. These criteria will probably be akin to those put forth in the Diagnostic and Statistical Manual (DSM) for Internet gambling disorder. For one to qualify for that diagnosis, their gambling/gaming would create “significant issues with functioning.” Also, it would call for five of the following signs:

According to the general consensus, video game addiction can develop at any age. However, many national studies primarily focus on kids under the age of 18.

If we start by just looking at those signs of video game addiction, we can already see some parallels starting to shape up. For people who struggle with opioid abuse, signs of addiction can also include negative impacts on family, occupation, social life and education. Looking more at the break down of video game addiction symptoms, we can draw even more similarities.

One reason people use drugs is very closely connected to why they play video games- how the brain rewards them. For those with video game addiction, there are functional and structural alterations in the neural reward system. This is a group of structures in the brain commonly associated with feeling pleasure, learning, and motivation.

The same characterization can be made of opioid use. When someone addicted to opioids uses these drugs, they also experience activity in the brain’s reward system. While it may not stimulate learning and motivation in the same way, those pleasure sensors will light up with activity.

Image studies have shown that the urge to play video games activates the same brain regions that light up when illicit drug users even think about using.

Surely, we aren’t going to say that people who struggle with a gaming disorder experience the same intense and harmful withdrawal symptoms as those who abuse opioids, but we can see that withdrawal is still a common thread. According to Computer Gaming Addicts Anonymous, some of the common video game withdrawal symptoms that we often see with opioid addiction include:

Of course, those who struggle with opioid abuse deal with a very different level of severity when it comes to withdrawal. The symptoms associated with opioid addiction are more likely to create a serious health risk than those currently attributed to video games.

For a lot of people who struggle with an addiction of any kind, there are often co-occurring issues or disorders. When you look at some of the research we find video game addiction is no different. Professor Douglas Gentile from Iowa State University has researched game addiction for several years. In one three year study of over 3,000 kids, he found that people who do develop compulsive gaming habits see an increase in:

Also, rates of ADHD are very high among the population of people who struggle with what might qualify as a gaming disorder. When it comes to opioids, co-occurring issues are also very common, including depression and anxiety disorders.

It is true that just like with drug use, you can develop a tolerance to video games. When once you would be content with an hour or two of playing a game to take you out of yourself for a while, over time you will be drawn more and more into spending time playing the game.

Have you ever decided to go on an all-nighter with a RPG or FPS? Some people are looking at those letters and wondering what language of nerd I’m speaking. That is ok. But for my fellow gamers, many of you probably know the feeling that there is never enough time to rack up those upgrades or find the perfect save point. Every time you say “I’ll stop after this boss fight,” only to find yourself an hour later customizing your avatar- that is the obsession.

Now while we can’t say that this obsession is always the same for everyone, it is still something to consider. Surely we should not label everyone who dedicates time to beating their high score with video game addiction. Still, when someone needs to play more and more to feel satisfied, that is the tolerance building. With opioids, this is the body needing more of the drug to get the same euphoric effect over time; or just needing it to feel “normal”.

And when you spend all day at the office thinking about what you’re going to spend all that XP on when you finally get home, the obsession might be starting to impair the rest of your life. With opioids and other drugs, this looks like spending all day planning to use or thinking about how to get more.

At this point, gaming disorder is still a new diagnosis, so most facilities are still working on effective treatment plans. As more research becomes available, there will probably be a variety of approaches to video game addiction treatment. Still, the need for innovative addiction treatment is pretty obvious when considering an addiction that is based on technology.

For most addiction recovery programs, the idea of abstinence is a common cornerstone. Not using drugs is kind of the whole point of getting clean and sober. However, when it comes to things like internet gaming disorder, it is hard to be completely abstinent from the internet in 2018. Taking into account that fact that most people use the internet for their work, or for staying connected socially, you find it is pretty much impossible to remain offline for long. Therefore, any new ideas around cognitive behavioral therapy and psychiatry can make a big difference.

While most people know that video game addiction is nowhere near as severe as opioid addiction, we still think making these kinds of connections may help people better understand the idea of gaming disorder. Many healthcare professionals believe that one problem facing effective video game addiction treatment is the idea that it is not harmful.

When it comes to opioids and other drugs, innovative addiction treatment can be the difference between life and death. Safe medical detox is a vital part of building a stable foundation for long-term sobriety. People who struggle with addiction also need more than just a reliance on abstinence. This is why holistic addiction treatment is so important with addressing the opioid crisis in America today.

Palm Partners Recovery Center believes that personalized and holistic addiction treatment is essential to helping people struggling with drugs or alcohol to not only overcome their addictions, but to transform their lives. No matter what your addiction, you should have access to compassionate care and options for effective care. If you or someone you love is struggling with substance abuse or addiction, please call toll-free now.