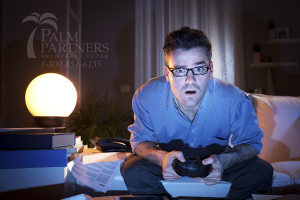 If you track the sensational media stories over, say, the past five years, they have increasingly described people suffering exhaustion after playing video games for 50 hours straight, teens killing their parents for taking away their games, and parents neglecting infants while being mesmerized by the online world.

To those who recognize Video Game Addiction, it is described as an excessive or compulsive use of computer games or video games, which interferes with a person’s everyday life…Video game addiction may present as compulsive game-playing; social isolation; mood swings; diminished imagination; and hyper-focus on in-game achievements, to the exclusion of other events in life.”

Yet not everyone agrees that video game addiction is a real thing.

“I do not believe that the concept of addiction is useful,” says Jackson Toby, emeritus professor of sociology at Rutgers University in New Jersey. “It only describes strong temptations; it does not explain strong temptations. What makes the temptation so strong? The memory of past pleasant experiences with the behaviour that we are talking about, in this case video games.” Toby added, “I don’t believe that someone can be addicted to video games.”

Though most people think ‘drugs or alcohol’ when they hear the term addiction, the medical community recognizes certain behaviors to be addictive, as well. In a WebMD feature on the definition of addiction, psychiatrist Michael Brody, MD, describes the following criteria for an addiction:

Kimberly Young, PsyD, clinical director of the Center for On-Line Addiction and author of Caught in the Net: How to Recognize the Signs of Internet Addiction — and a Winning Strategy for Recovery says compulsive gaming meets these criteria; she has even seen severe withdrawal symptoms in who she’s deemed game addicts. “They become angry, violent, or depressed. If [parents] take away the computer, their child sits in the corner and cries, refuses to eat, sleep, or do anything.” Young tells WebMD, “It’s a clinical impulse control disorder;” an addiction in the same sense as compulsive gambling.

Back in 2012, the American Psychiatric Association (APA) said it would not be listing video game addiction as a mental disorder in that year’s edition of the Diagnostic and Statistical Manual of Mental Disorders (DSM). However, the APA added that it was considering including an appendix consisting of reward-seeking behavioral disorders, such as video game and internet addiction, so as to “encourage further study.”

In May 2013, the American Psychiatrist Association (APA) proposed criteria for video game addiction in the DSM, again stating that there was not enough evidence to support including it as an official mental disorder. However, proposed criteria for “Internet Gaming Disorder” are included in Section 3, Conditions for Further Study. While Internet Gaming Disorder is proposed as a disorder, it is still unclear as to whether obsessive and compulsive gaming is a result of – to some extent – other psychological disorders.

“People play those games often in a desire to meet their social needs,” said Hilarie Cash, a Washington state therapist who runs a six-bed inpatient program for internet and video game addicts. “There’s a sense of friendship and self-esteem you develop with your team-mates, you can compete and be co-operative. It really feels as though it meets your social needs.”

Do you experience obsessive thoughts and nagging compulsions to engage is certain behaviors? Has it made your life unmanageable – causing strained relationships, financial problems, and other negative consequences? Do you feel irritable and moody when you try to stop? It might be time to seek professional help. Call an Addiction Specialist today at toll-free 1-800-951-6135.