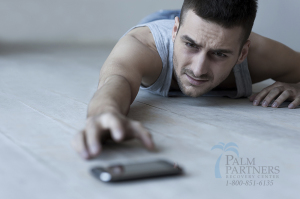 Research on the possibility of cell phone addiction is in its infancy, and much of it centers around the habits of the youngest millennials, specifically teens and young adults, a generation that probably never was without a cell phone or, at least, it’s a blurry memory from early childhood.

Dr. Roberts is a professor of marketing at Baylor University’s Hankamer School of Business who surveyed 164 college undergrads about their relationship to their phones. In order to define ‘cell phone addiction,’ he explored which cell phone activities seemed to be most associated with what the respondents considered to be addiction to their cell phones. Roberts found that there were differences in specific cell phone activities between male and female participants. For example, women most often used Pinterest, Instagram and as well as the actual call-making function and Roberts saw these behaviors as possible cell phone addiction (listening to music was not).

On the other hand, men’s possible cell phone addiction predictors were the use of Facebook, Instagram and Twitter, as were phone calls, texts, emails and reading books and the Bible on their phone.

Roberts asserted that the gender differences could be construed that women use their phone to foster social relationships, while men see their cell phones as a source of entertainment and usefulness.

“Cell-phones have become inextricably woven into our daily lives — an almost invisible driver of modern life,” Roberts concluded in his study. “It is incumbent upon researchers to identify the all-important ‘tipping point’ where cell-phone use crosses the line from a helpful tool to one that enslaves both users and society alike.”

Behavioral Addiction Disorders and the DSM

It’s noteworthy that gambling addiction disorder is currently the only diagnosable behavioral addiction that’s officially listed in the most recent edition of the Diagnostic and Statistical Manual of Mental Disorders (DSM). According to the American Psychological Association, gambling addiction disorder is classified in this way because it is similar to substance abuse disorders in that it can be described in terms of “clinical expression, brain origin, comorbidity, physiology, and treatment.”

Cell Phone Addiction Around the World

In a 2013 study in the UK, researchers surveyed a sample of 1,529 teenaged students regarding their cell phone use and classified 10% of the participants as “problematic users.” This portion of participants tended to consider themselves to be expert users of cell phones, used their cell phones extensively as well as identified that their peers had a similar problem.

In Turkey, a study of college students revealed that people who scored high on a scale for problematic cell phone use were more likely to come from poor families, have a type A personality and had received their first cell phone at age 13 or younger. Not surprisingly, the researchers other finding was that, as cell phone addiction levels increase, sleep quality decreases.

Study Results: Are You Addicted to Your Cell Phone?

It’s important to note that Roberts’ study shows that, of the people who are “addicted” to their cell phones, most are primarily using them as a way to stay connected to other people. In a 2013 blog post for Psychology Today, psychology professor Ira Hyman, Ph.D., writes that researchers might be making a mountain out of a molehill; what they are observing is the rise of a new norm in social interaction, which is immediate, hyper-connected and here to stay.

“Feeling a need to be socially connected hardly seems like an addiction to me,” Hyman writes.

Are You Addicted to Your Cell Phone? If you’re experiencing a behavioral addiction, such as internet, gambling, or cell phone addiction, or a substance abuse disorder, such as drug addiction, help is available. Please call toll-free 1-800-951-6135 to speak directly with an Addiction Specialist. We’re here to answer your questions.