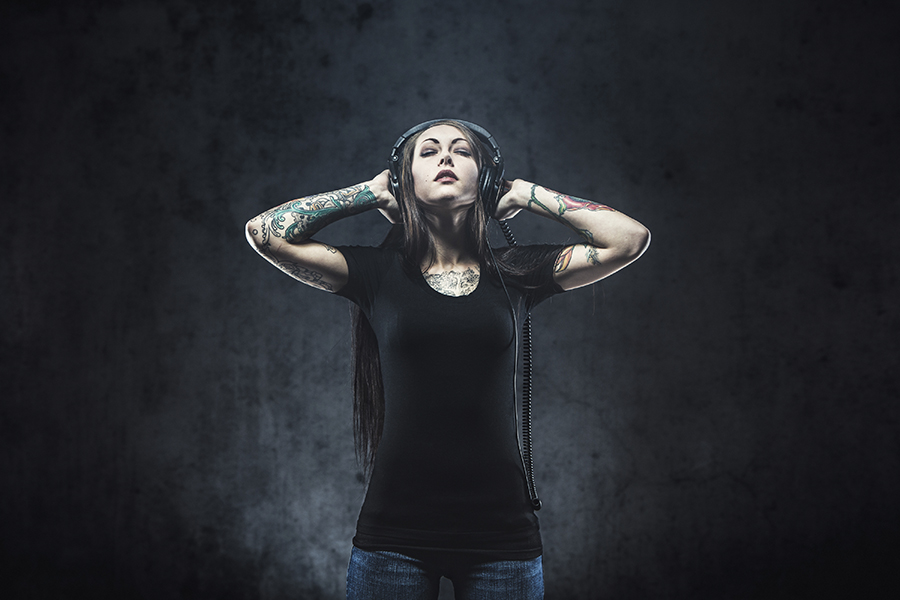 Ever have someone ask you why you’re so angry? Naaaah, me neither.

Not because you are, but because of the music you listen to? Have you at least had people look at you sideways because they never figured you would be the one blaring heavy metal, punk rock or even rap music in the car? I know people are typically surprised when I have Bring Me the Horizon at full blast in my headphones during my workday, and they always say “you seem like such a calm guy.” Well, reading online all morning about a dress and how no one knows what color it is gets a little frustrating.

What if I told you that a lot of times that so-called ‘angry music’ is usually listened to, and even made by some of the calmest and most cool minded people? Or, in fact… that the theory about listening to ‘angry music’ for positive results is actually backed up in a recent study conducted by Maya Tamir and Brett Ford, researchers from The Hebrew University of Jerusalem.

Tell Me How You Really Feel

The study about the science of loud and ‘angry music’ was conducted using 175 people, who were asked to participate in role-playing exercises where they had to either confront a person (one example of these imagined scenarios was a cop interrogating a suspect) or they were asked to collaborate with someone. The music came in before the role-playing began, when the subjects were allowed to choose from a selection of music to aid in evoking the emotions they would need, including the basics:

The subjects of the study were also asked questions about other factors about their personalities, such as:

It was up to them to decide on the music they would hear before beginning the exercise with the other individual. Tamir stated,

In all reality, it is not that abstract of a concept for someone to pump themselves up with aggressive music before engaging in a tough task: Like sports teams or professional fighters playing loud aggressive music to make dramatic entrances. So it should come as no surprise that the individuals who chose ‘angry music’ had no problem completing their tasks. But that’s just one side of the coin.

Tamir also found that the people who actually chose ‘angry’ or ‘aggressive’ music actually showed an over-all greater sense of well-being than the people who avoided feelings of unpleasantness or confrontation. So really the answer isn’t so black and white. Through this Tamir concluded,

So basically by constantly trying to shield ourselves from being unhappy or depressed we expose ourselves even more, becoming more vulnerable when the time comes that we have no choice but to hurt, when we are truly unhappy and we have no conditioning to face it.

Tamir’s study actually reinforces the idea of engaging in what Frederic Luskin, a Stanford University professor and co-chair of the Garden of Forgiveness Project at Ground Zero, calls “constructive anger”. Professor Luskin has actually lectured on this very topic at great length, and he usually states that unlike destructive anger, constructive anger is the type of anger that aims to actually fix a problem.

“Constructive anger usually leads people to feel that they’ve accomplished something somehow. They’ve protected somebody or solved a problem.”

So when you listen to GWAR at top volume in the office until you finally ask your boss for a raise, that’s a form of constructive anger. You’re building a form of aggressive emotional leverage, and it gives you the courage to solve an issue.

But it’s not all sunshine and smiles, dude!

Luskin is careful to say there’s a line between listening to something that inspires aggression and actually acting out on that anger. Needless to say, he is one guy you won’t catch throwing elbows in a mosh pit anytime soon. Luskin believes that when you enter the mosh pit and start engaging in violence, no matter how fake it might be (or how understanding the people you punch are) that’s where the line between constructive and destructive anger is being crossed.

As far as pumping up the volume, Luskin says there could be some value in the idea that people who enjoy getting blasted by guitar riffs and drum solos while screaming at the top of their lungs in a crowd of thousands of other heavy metal fans are actively engaging with their anger in a safe, temporary and controlled way. He says,

“It could be nothing different than doing other sorts of thrill-seeking. When people go bungee jumping…it stimulates adrenaline, it gives them a sense of adventure. It serves as a wonderful discharge for certain energies. It’s different strokes for different folks.”

Emotions are essentially something that we humans know how to use strategically; I mean how many times, when you’re honest with yourself, have you wanted to feel a certain way and when the feeling came you kept it going with music or behavior, even if it was an angry or sad feeling? Essentially what we’re saying is that avoiding being angry or hurt and only seeking ‘happy thoughts’ really won’t get you anywhere.

I agree, because I know the times I feel more intense feelings are the times I grow the most. Tamir has stated,

“We all have a deeply ingrained belief that we want to feel emotions that feel good and avoid those that feel bad at any cost. But emotions do much more for us than merely provide pleasure and pain.”

In my opinion, there is something very enduring about cranking the volume on your headphones to something that shakes your heart like a house in a hurricane. The paradox is that sometimes the more we try and shelter ourselves from the bad feelings, the more sensitive we become to them. Then they have the potential to do more damage, because we can’t face them with a smile.

Truly experiencing the painful or vexatious feelings through music is a constructive way to identify the feeling; to let that honest expression pass through you can be cleansing, and ultimately letting it be guided into growth is an experience we chose for ourselves that can actually cultivate our resilience.

Music is one element of the outside world that can have some influence on how we feel, and sometimes separating ourselves from the things that hurt us the most means we need to change those elements. Learning to create healthy emotional responses is one way we train ourselves to be healthier people, but for addicts it often means a lot more. If you or someone you love is struggling with substance abuse or addiction, please call toll-free 1-800-951-6135