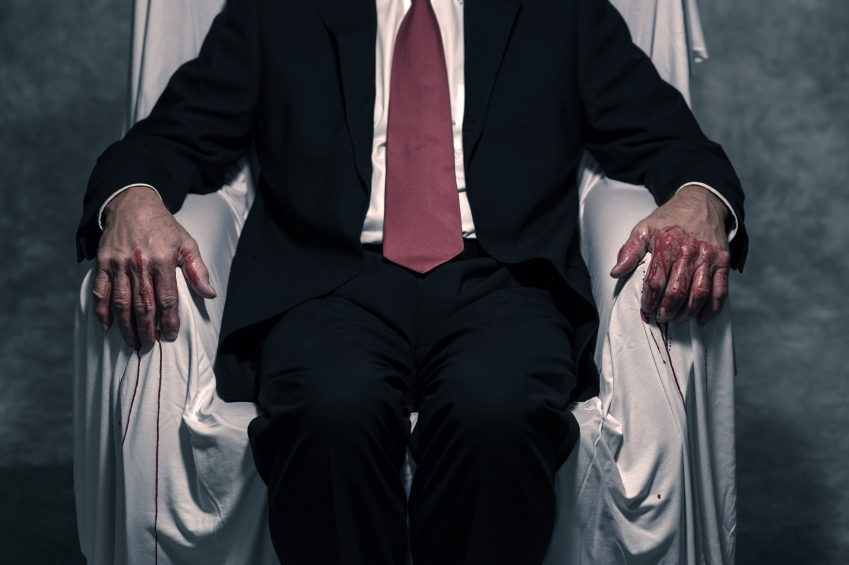 We have seen the cost of the ‘war on drugs’ in America. We have also seen the economy suffer, as the cost of living rises and the gap between the ‘haves’ and the ‘have nots’ swells, accompanied by the whispers of crooked deals and executive injustices. Brokers breaking all the rules are like businessmen with bloody hands, and it seems like the stock in human life sinks under the weight of the almighty dollar.

It’s time the focus shifted from hunting down and demoralizing drug addicts, to showing the law goes both ways and CEO’s can become convicts too.

I personally don’t put too much stock in politicians these days, but this Bernie Sanders character is constantly being brought to my attention for having some pretty interesting points of view, and he just made a pretty powerful statement that got me thinking. The presidential candidate has had a sturdy track record of calling out the hypocrisy of the United States ‘war on drugs,’ along with the industrialized and overpopulated prisons, and the criminal justice system.

Most recently, he got my attention when he expressed his opinions on the imbalance and injustice we witness in America as far as punishing people for drugs, while allowing criminals of corporate corruption to continue leaching off the nations limping economy.

Just last week the Department of Justice (DOJ) announced new plans to initiate a war on white-collar crime. The DOJ also pledged to finally prosecute those responsible for misconduct on Wall Street, which ultimately poured gas on the fire that created the 2008 financial crisis.

In a memo released last week the DOJ claimed it would pursue action that would hold both corporations and individual employees accountable for the crimes that drove the country into recession, setting new guidelines for addressing corporate crime.

But according to Senator Sanders, from Vermont, it’s a little late for that. And in all reality he may be more right than we think. The law would state that the statute of limitations has already expired for most of the misconduct that took place leading up to the recession back in 2008, which would mean it is not one of those ‘better late than never’ scenarios.

Those with white-collars could be facing stricter penalties, but how much stricter are we really talking? How much of a difference will this memo make? I guess only time will tell.

What I see from Sander’s reaction to this announcement is an attempt at exposing the true injustice created by stigma when it comes to drugs and drug addiction, and it speaks to how the general conception is changing in America. Again, a big point he makes is the way we have let executives slip under the radar, and it almost feels like its been hidden behind the smoke screen of drug wars. In a recent statement Sanders stated:

“One of the biggest mistakes our government made after the financial crisis was not prosecuting the people responsible for the greed, recklessness and illegal behavior that crashed our economy and ruined the lives of millions of Americans. It is not acceptable that many young people have criminal records for smoking marijuana, while the CEOs of banks whose illegal behavior helped destroy our economy do not.”

When I first read that, it was actually pretty inspiring stuff. To read a politician say that not only is it not fair, but it is NOT ACCEPTABLE for young people to have criminal records for low-level and non-violent drug offenses… criminal records that could determine the course of the rest of their futures and undermine their potential to contribute to changing the world… while those who deliberately, and ILLEGALLY, drained the life out of our American economy for millions upon billions to line their own pockets can shrug it off and wash their hands of it.

In the years since the climb of the financial crisis a number of banks have pleaded guilty to felony charges, which may seem fair, but individual bankers who were involved in the activity that caused it all have avoided all criminal prosecution. Nothing happened. They admitted to crimes that shook the economy of a country to its core, but don’t even get punished as bad as the average citizen for a minor possession charge?!

To put that in perspective, more than 2.2 million Americans have been put behind bars over the same course of time, and a bewildering percentage of them are serving time that will definitively alter their ability to have a quality of life once released for low-level felonies involving marijuana (which is quickly becoming legalized in several states) and other drugs.

Apparently this isn’t the first time Sanders has took a stand against the drug laws and the way we have addressed drug use in America. Last month he tweeted:

“There is no question that the war on drugs has been a failure.”

That is not too far removed from what current president Barack Obama himself has said about the way the system has worked against the American people who struggle with substance abuse instead of working to improve the lives of these individuals and ultimately their communities.

How can we as a country have any real claim to social consciousness if we aggressively persecute and marginalize people who are suffering from addiction, while allowing thieves in suits selling stocks to live lavishly off the profits of bankrupting the nation… which if you take the time to think about it actually contributes to poverty and desperation; circumstances often leading to drug addiction and other drug related issues.

In a system where the rich and vicious wolves of Wall Street tore apart our financial structure by breaking the laws that govern the worth of the dollar, we should turn our attention toward treating the addicts and the downtrodden instead of punishing them, and we should hold accountable those who orchestrated and profited from the recession that helped create the climate and the culture where addiction was able to thrive.

Addiction destroys lives, and while the war on drugs may have let us down in a lot of ways, there is always hope for a better future. Anyone can make a difference in their own life just by reaching out and getting the help they desperately need. If you or someone you love is struggling with substance abuse or addiction, please call toll-free 1-800-951-6135