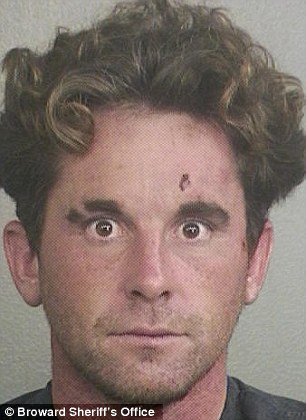 It seems like Florida is the land of scumbags, white-collar criminals, and the jumping off point of any new (read: psychosis-inducing) drug that comes ashore. A few years ago, it was the “Causeway Cannibal” who basically ate the face off of a homeless man. Well, looks like there’s a new sherriff in town and it makes you just as crazy.

A Florida man, high on a synthetic drug called Flakka, stripped off his clothes and ran naked through traffic in the city of Fort Lauderdale in South Florida. Apparently, the man was trying to escape some imaginary killers who he said stole his clothes – the reason for him being naked, duh! – and were out to kill him.

Matthew Kenney, 34, reportedly told police that he smoked Flakka before the incident that took place early Saturday evening, stripping down to just his sneakers.

As an indication as to just how powerful this new designer drug is, Kenney told arresting officers that he would “rather die than be caught by these unknown people.” According to a Fort Lauderdale Police report, Kenney added that “if I got hit by a car they would stop chasing me.”

After his arrest, Kenney was hospitalized for a psychiatric evaluation.

Flakka is usually made from the chemical alpha-PVP, a synthetic version of the stimulant cathinone, which is the same class of chemical used in making bath salts. Flakka can be used in various ways: by injection, snorting, smoking, or by swallowing and has been nicknamed “5-dollar-insanity” for its extreme psychological effects and cheap cost.

In a revisit to the horror of the bath salt epidemic three years ago, this new synthetic drug is causing the same kind of panic.

In fact, the story about Mr. Kenney is not the first of its kind regarding Flakka; it has reportedly led to other bizarre behavior in Florida, that is, bizarre-for-Florida behavior.

There have been other incidents – linked by police to the psychosis-inducing drug –including a man standing armed and naked on his roof while yelling “I feel delusional, and I’m hallucinating.” Other incidents involving Flakka include several attempted break-ins at police precincts and an attack on an 86-year-old woman.

Flakka has been compared to “bath salts,” because it causes similar symptoms and behaviors but, it’s not exactly the same drug. Experts say Flakka, like bath salts, can cause feelings of “superhuman strength” and can result in “psychotic” behavior in users.

Flakka is made from the chemical alpha-PVP, a man-made version of cathinone, which is a stimulant that’s as strong as the most potent varieties of crystal meth, cocaine or MDMA.

“We’re starting to see a rash of cases of a syndrome referred to as excited delirium,” said Jim Hall, an epidemiologist at the Center for Applied Research on Substance Use and Health Disparities at Nova Southeastern University.

“This is where the body goes into hyperthermia, generally a temperature of 105 degrees. The individual becomes psychotic, they often rip off their clothes and run out into the street violently and have an adrenaline-like strength and police are called and it takes four or five officers to restrain them,” Hall continued.

Does the idea of a new drug with potent effects interest you? Do you find that you’re always looking for that next fix – the one that’s going to get you higher than you’ve ever been? For people with substance use disorder, such as drug addiction, these thoughts and feelings are very real and very common. When in active addiction, the addict is always looking to replace that first high – the one that’s never replaceable. And so they keep using. And, often times, they turn to other, more potent and dangerous drugs and/or they mix different drugs in an effort to feel good. This can lead to overdose and death. Please call toll-free 1-800-951-6135 to speak with an Addiction Specialist today.