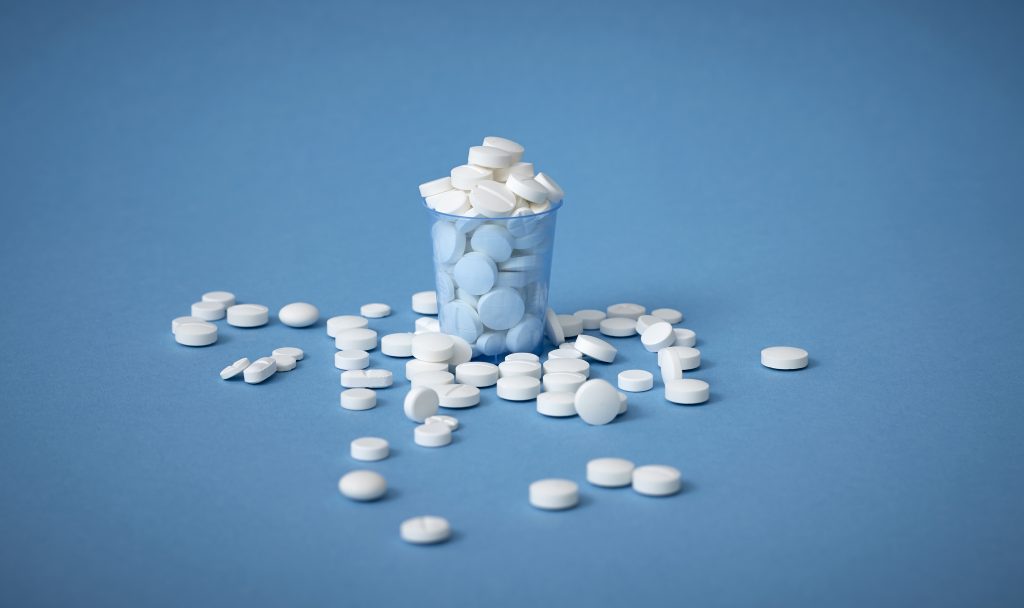 Despite the fact that over 91 people die every day from an overdose due to prescription drugs, some people still struggle to realize that prescription drug abuse is the driving force behind the current opioid epidemic. According to the American Society of Addiction Medicine (ASAM):

One of the biggest issues is that powerful opioid painkillers are being overprescribed. Whether due to aggressive marketing tactics used by Big Pharma companies or the corrupt ‘pill mills’ where doctors were dishing out excessive prescriptions of potent drugs to be sold on the street, prescription opioids flooded the neighborhoods across the nation, helping create one of the worst addiction outbreaks in American history.

But it wasn’t just the fact that drugs were making it onto the streets. In general, even legitimate opioid prescriptions were astonishingly high. While too many people still think the only problem is heroin or street drugs, the facts show us that opioid painkillers were still largely overprescribed in recent years, which contributed to the current crisis.

Too ‘Legit’ to Quit

According to the National Survey on Drug Use and Health, nearly 92 million U.S. adults in 2015 were taking a legitimately prescribed opioid. That translates to 38% of the adult American population.

There were an estimated 240 million opioid prescriptions in 2015, nearly one for every adult in the general population. Even the Deputy Director of the U.S. National Institute on Drug Abuse, Dr. Wilson Compton, said,

“The proportion of adults who receive these medications in any year seemed startling to me”..”It’s an awful lot of people who take these, mostly for medical purposes, but within that, a significant percentage end up misusing them,”

So while a lot of these prescriptions were going to treating serious conditions, how many ended up on the street or being abused at home because they were overprescribed?

The trend didn’t end there. According to a new report, nearly 3 million people who had surgery in 2016 became persistent opioid users, taking the drugs 3-6 months after a procedure. The report also states that due to overprescribing, 3.3 billion pills were left unused by patients, which left them open for diversion or misuse.

Some pain management advocates insist that pain may end up being undertreated due to the rising scrutiny of opioid prescriptions.  Many of these advocates say it is extremely difficult to truly know if opioids are overprescribed because pain is too hard to objectively quantify. Therefore, some patients may actually need more relief resources than others.

Yet, prescribing rates are still, at the very least, questionably high. Especially considering by most estimates that over 50% of opioid pills legitimately prescribed are unused by patients, which suggests significant overprescribing certainly exists.

One recent case in particular that stands out concerning overprescribing of medications is the story of a small northwestern county in Arizona where 4 doctors prescribed nearly 6 million opioid pills in a 12 month period. The data provided by the Controlled Substances Prescription Monitoring Program did not list the doctors by name, but did give detailed information about the prescriptions.

Out of all 4, the top prescribing doctor is responsible for:

The second-place prescriber is responsible for:

The other two doctors totally a combined 2.4 million pills prescribed.

The four doctors in question are located in Mohave County, which as of 2016 is home to approximately only 205,249 people. That comes out to about a 30 opioid supply for every single person in that county.

Now while pain may be hard to objectively quantify, these numbers are obviously unsettling. Even the executive director of the Arizona Board of Pharmacy, Kam Gandhi, could not explain why or how these four physicians were able to issue so many opioid pills.

A spokesperson for Attorney General Mark Brnovich declined to specify exactly what actions are being taken by his office concerning this development. However, according to AZ Central Doug Skvarla, who directs the Controlled Substances Prescription Monitoring Program, said that information has been passed on to Brnovich’s office for “an open investigation.”

Illicit Use of Prescriptions

There are plenty other issues with opioid prescriptions being taken advantage of all over the United States. Pain management advocates often argue that the problem isn’t about opioid prescriptions; it’s the people that misuse and divert the medications. In other words, that the people abusing opioids frequently don’t have a legitimate prescription. A lot of opioid pills being abused are obtained illicitly.

Many people won’t use their whole prescription. Many will actually give pills to a loved one who doesn’t have their own pain treatment. Or they will sell their remaining pills. Pill mills and ‘doctor shopping’ allowed for the even worse spread of excessive opioid prescriptions. Like in Illinois, where one individual received 73 prescriptions for opioid drugs from 11 different prescribers and filed them at 20 different pharmacies. In some cases, the individual filled prescriptions at multiple pharmacies in one day.

There is absolutely a high demand on the illegal drug market for prescription opioid painkillers. As a former addict who spent over 7 years using, buying and selling opioid medications on the street, I can say there is plenty of ways to get these drugs without a prescription.

However, if we back-track a little bit, how did so many potent medications get onto the streets if there is no overprescribing?

Pain management is absolutely necessary. There must be resources and effective medications available for those suffering from serious medical conditions or recovering from life-altering procedures. There is no denying that we have to provide effective pain relief options for patients who desperately need it. So, of course, this is a difficult conversation to have, because many people can take these medications are directed and be fine when they are gone. Some people require long-term pain treatment, but it does not result in a severe addiction.

Still, the fact is that if these medications weren’t being prescribed more than medically necessary, they would have never flooded the underground drug marketplace as rapidly and as abundantly as they did. Between doctors overprescribing (sometimes for kickbacks), patients working the system and manipulating physicians, and the aggressive marketing tactics of Big Pharma going unchecked, there are plenty of elements at play.

Undoubtedly when we examine the opioid epidemic we cannot ignore any contribution. We have to make efforts to combat the spread of heroin addiction. There has to be an intensive effort to deal with the incredibly deadly synthetic opioids like fentanyl and carfentanil, and people also have to acknowledge their own choices and do their part to move forward. It might be a difficult and painful process, but it is necessary.

According to one report, even just a 10% reduction in surgery-related opioid prescribing would reduce:

Not only can we do better to treat those suffering from chronic and severe pain, but we can do better to make sure these potent and habit-forming medications don’t end up in the wrong place. For those who abuse prescription opioids, or who have found themselves using heroin, we need to provide safe and effective treatment options. Palm Partners Recovery Center has been treating people struggling with drug dependence and substance use disorder for decades, focusing on holistic and comprehensive care. If you or someone you love is struggling, please call toll-free now.