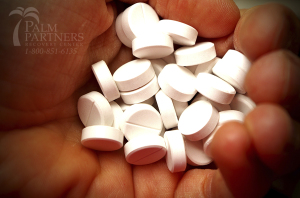 I just celebrated two years of sobriety, being clean and sober from all mood and mind-altering substances, save for caffeine and nicotine (nicotine-free now for 6 months). In my addiction, I used and abused anything I could get my hands on: from alcohol to painkillers to benzos to even sleeping pills. I would say that my true DOC was opiates, painkillers and later, heroin.

My love affair began with a drug called Tramadol, also known as Ultram and Ultracet. It had been prescribed to me for a legitimate pain condition and, at the time, I was told it was a ‘safe’ drug, meaning that it had a low rate of physical dependence amongst those to whom it’s prescribed. I was told it was a “non-narcotic opioid,” not really knowing what that meant. I thought it sounded good, though and trusted my physician whole-heartedly.

What I found, however, from taking Tramadol, was that it made me feel good. You know, that certain euphoric high that illicit drugs and narcotic painkillers give you. I also noticed that, if I took more than was prescribed, I felt even better; higher.

Around this time, I had graduated from an institute of higher learning and was living in the college town. This wasn’t a very big town nor was there much to do, except hit the bars and pubs along Main Street. I honestly wasn’t that big of a boozer anymore; alcohol had stopped ‘working’ for me a while back, while I was still in college. It just didn’t sit well with me physically and I couldn’t drink enough to get drunk (why else do people drink, amirite?).

Then one evening, when I had plans to meet friends at a local pub, I took my Tramadol beforehand. I ordered a beer with the rest of them, not expecting to be able to finish it. This time was different, though. I could drink, and drink some more. The alcohol didn’t upset my stomach! And, as an added bonus, I was pleasantly high and drunk, due to the synergistic effect of the Tramadol and alcohol together. This was to be my new jam for a while.

But ‘a while’ soon passed and the drug combination stopped working. Even with the tramadol, I wasn’t able to drink alcohol anymore. But, you know what? I didn’t even matter. I had my new love: painkillers. And, in love I was!

The rest of my story doesn’t really matter for the purpose of this article. I just wanted to illustrate how my addiction to narcotic painkillers and heroin began. It’s been my experience that there are several other people like me out there, who thought they were being prescribed a relatively safe drug with no potential for addiction only later to find themselves hooked.

Others in recovery don’t seem to know what Tramadol is and that is worrisome to me. I want to get the word out that Tramadol is not something to be taken lightly – both literally and figuratively.

Always always always be a self-advocate when it comes to your health and when dealing with your healthcare providers. Let them know you are concerned about taking certain drugs, such as narcotic painkillers and benzos, if they want to prescribe a drug of these classes to you. There are alternatives to narcotic medications. In the case that your condition requires something more potent, say, you’ve undergone surgery, then don’t be a martyr. There are safe ways to take these drugs. Always follow the prescription instructions. Talk to your sober supports and sponsor. Have someone trustworthy hold your prescription for you. Whatever it takes.

So, is tramadol safe for people in recovery? It’s not necessarily a black-and-white issue with a clear-cut answer. Tramadol is an opioid – which just means that it is a man-made opiate (heroin). If you are struggling with prescription painkillers or any other substance, help is available. Call toll-free 1-800-951-6135 to speak with an Addiction Specialist. You are not alone.