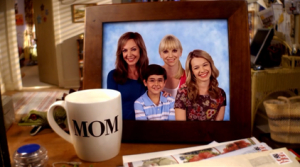 Alcoholism and drug addiction aren’t new themes when it comes to serious television dramas, however, sitcoms (situational comedies) generally don’t treat these very serious situations in their themes. Until now.

With two main characters that have a history of drug addiction, this show is breaking the mold. There’s an audience and laugh-track which might seem out of the ordinary for a show about two drug addicts. That’s because the show is really about life in recovery.

“Recovery is actually dealing with the issues that are below addiction,” says Lorre of the Emmy-minted CBS sitcom (thanks to Allison Janney’s plucky, spot-on performance), which returns tonight for its second season. “The drugs and alcohol treat those conditions, but treat them very poorly, and it creates another layer of problems. Treating the underlying conditions of addiction is the show, not the addiction itself.”

“It’s a heroic story to tell about a woman raising a child in this world by herself, or raising children,” says Lorre. “Adding on the difficulties of having had a troubled past, recovering from alcoholism—that’s a day-to-day situation.”

“Christy desperately wants to be a better mother, daughter, and person, but whenever she gets the opportunity, she says or does the wrong thing, at least at first,” says co-creator Gemma Baker. “I think that’s really human. And the great thing about having a lead actress, like Anna Faris, is that she is so charming—you can’t help but love and root for Christy. The thing I love most about Bonnie is that she always says exactly what’s on her mind and Allison Janney delivers those moments perfectly.”

“I think our show does a good job of finding humor in addiction and recovery because we don’t shy away from the seriousness of the issue. Chuck really encourages us to lean into the emotional moments, which means we don’t have to end every scene, or every episode for that matter, on a joke. If we just went for the funny in every single moment of this show, and completely ignored how serious addiction is, I don’t think the audience would be able to laugh as easily. Those heavy moments really help us earn the light ones.”

When it comes to mainstream TV Land, humor and drugs usually don’t mix. But this couldn’t be any further from the truth about addiction, which is this: many people who struggle with substance abuse and addiction have a great sense of humor.

From my own experience, I have always relied on my humor as well as my knack for adding levity to heavy situations, like addiction, in order to keep my sanity. Without it, most recovering addicts would be dead – in one way or another. Recovery isn’t simply about not drinking and not using drugs. It’s about creating a life worth living. If it wasn’t, I don’t think you’d be able to convince me that sobriety was worthwhile.

In fact, you could probably make a case that nobody laughs at their imperfections and character defects like an addict. The idea that recovery and darkness must go hand in hand just isn’t true, which is why CBS’s sitcom, Mom, is such a refreshing departure from the usual fodder of TV sitcoms.

A sense of humor is definitely a great coping mechanism to deal with life’s heavy situations, such as being in recovery from drug addiction. But, don’t get it twisted; active addiction is a very serious, life-threatening condition that isn’t to be taken lightly. If you are struggling with substance abuse or addiction, help is available and recovery is possible. Call toll-free 1-800-951-6135 to speak directly with an Addiction Specialist who can understand what you’re going through and answer your questions. We are available 24/7.