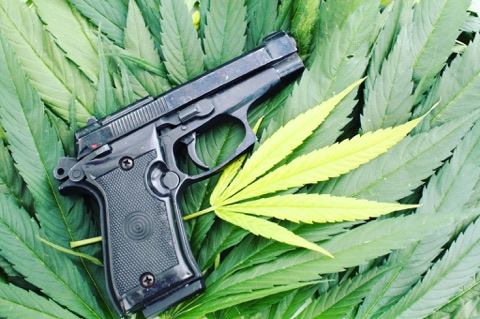 You may remember last week we talked about how some states are pushing to take gun rights away from people prescribed medical marijuana. Of course, this topic has sparked a lot of conversation on how medical marijuana should be addressed. But a lot of the discussion has been on how 2nd amendment rights should be protected. The debate ranges from push-back for individual states, to argue that federal law still considers marijuana a schedule 1 drug, meaning people who use the drug are not allowed to own or possess firearms.

Well, since we have already jumped into the discussion comparing gun rights and medical marijuana, we might as well talk about another interesting story brought about by a Democratic congressman from California.

The whole conversation starts with the introduction of the Concealed Carry Reciprocity Act, which is currently being pushed by Republican lawmakers this week. This new piece of legislation would mandate that if someone is able to receive a concealed carry permit for a firearm in one state, that all other states would be required to honor that concealed carry permit. This means even if your state has much more strict requirements for concealing a gun, someone from a state with much more relaxed requirements is still allowed to travel into your state with a concealed weapon.

Now to be clear, there are many states that already honor concealed carry reciprocity. For example, if I were to get my concealed carry permit in my home state of Ohio, the vast majority of states would allow me to carry a concealed weapon.

Also, in the Buckeye State, they actually recognized the concealed carry permits of every other state already.

But Democratic Congressman Ro Khanna argues that it goes against the very idea of state’s rights and federalism. He argues that the Republican Party, which is often the champion for state’s rights, is forgetting that each state should be able to determine what laws are best for their own citizens and that this legislation will essentially federalize concealed carry permits.

The reason we wanted to talk about this is due to the argument used by Congressman Ro Khanna using marijuana to try and make his point.

Congressman Ro Khanna, who represents Silicon Valley area, made a video that argues that if the GOP wants to move forward with making concealed carry permits a national movement, then the same protections should be required by all states to honor marijuana laws.

In the clip posted to Twitter on Wednesday, Khanna states:

Going off of Khanna’s comparison, applying the logic of the H.R. 38 Concealed Carry Reciprocity policy to marijuana would mean someone in California who received a doctor’s recommendation for medical marijuana for anxiety should be able to legally use marijuana in Pennsylvania.

Pennsylvania has more strict restrictions on their medical marijuana laws, with anxiety not being included as a qualifying medical condition.

While Khanna’s comparison is more tongue-in-cheek as part of his opposition to the H.R. 38 bill, it does present an interesting question; should medical marijuana be recognized with reciprocity? One should remember that gun ownership is an actual constitutional right, versus cannabis decriminalization being a recent movement.

Then again, does it make sense to argue “what’s good for the goose is good for the gander” in a context like this? This brings us back to the argument of whether or not the federal government should be putting more effort into federal law against marijuana, or if the states have more a right to decide if they will allow cannabis for medical or recreational purposes.

It is still an interesting argument to make. Should states compare these two concepts in the debate on policy?

Marijuana reform remains a controversial topic. However, the legal status of any medication does not take away from the dangers of substance abuse. Plenty of prescription medications have a high risk of abuse and addiction, and marijuana abuse can be harmful to an individual’s life.

People often mistake marijuana for having no addictive properties. This misconception is because most people consider cannabis a ‘soft drug’ when compared to other ‘hard drugs’ such as crack-cocaine or heroin. While the chemical hooks may not be as drastic or apparent, the truth is that habitual use of any chemical can result in developing tolerance, which can also lead to withdrawal. Symptoms most commonly associated with marijuana withdrawal include:

If you are struggling with cannabis abuse, do not hesitate to get help today. Often time’s people who use one substance develop a habit of abuse with many others.

Be careful not to underestimate the substances you are using. If you or someone you love is struggling with substance abuse or addiction, please call toll-free now.