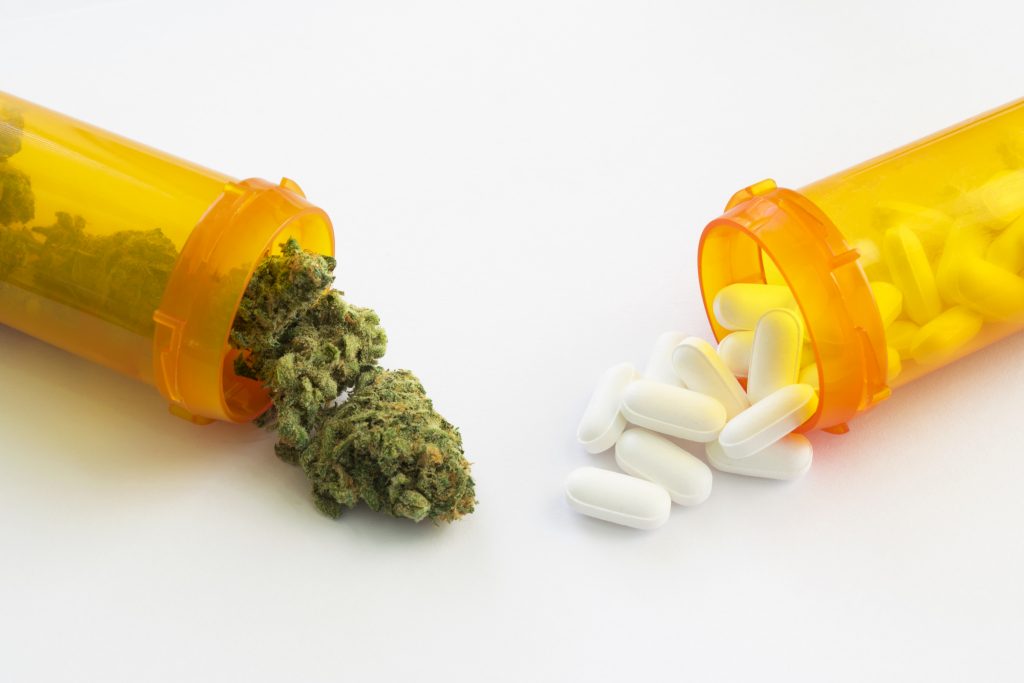 This may seem like a big leap, but some people still manage to make it. So we thought maybe we should take a look at both sides of this argument to understand the issue.

The Attorney General for the Trump Administration, Jeff Sessions, consistently comes into conflict with advocates for cannabis in America. His stance has been about the same for as far back as his career in politics, and recent actions by Jeff Sessions have caused a stir with those in support of legalization, whether medical or recreational.

Now, it seems Sessions believes that cannabis use is actually why we have an opioid crisis.

Recently, Jeff Sessions was speaking at the Heritage Foundation to the Reagan Alumni Association this week. As part of the conversation, Sessions did put a lot of focus on cutting prescriptions for opioid painkillers as a critical element to fighting the crisis. So many people who use illicit opioids like heroin or fentanyl start with prescription drug abuse. This much has been shown in several studies, such as one from 2017 published in Addictive Behaviors which found:

Some would argue that better regulations put into practice over the last several years have helped to curb that trend.

However, Sessions went on to say,

“The DEA said that a huge percentage of the heroin addiction starts with prescriptions. That may be an exaggerated number; they had it as high as 80 percent. We think a lot of this is starting with marijuana and other drugs too.”

It was that last comment that caught a lot of attention. It wasn’t all that shocking, considering Sessions never been a supporter of cannabis use. Still, some people found this commitment to the gateway drug mentality to be a little out of touch.

So, we should look into the argument from both sides.

Can You Connect Cannabis and Opioids?

A recent paper in the American Journal of Psychiatry shows Mark Olfson and a research team delves into data concerning the gateway drug concept.

The team uses data from the National Epidemiological Survey on Alcohol and Related Conditions (NESARC) to examine the association between:

In relation to the survey the term ‘non-medical use of a prescription opioid’ is defined as using the drug “without a prescription, in greater amounts, more often, or longer than prescribed, or for a reason other than a doctor said you should use them” during the previous 12 months.

Olfson and his group claim that according to the data:

People who used cannabis in the 12-month period prior to the initial interview were at increased risk of non-medical use of prescription opiates 3 years later.

They even checked the variables, and found this was true even when the data were adjusted to control for:

Those studied who used marijuana were still at higher risk of opioid use.

To clarify, Incident Prescription Opioid Use Disorder was defined as use that occurred after the first interview that qualified to be considered opioid use disorder, restricted to people who had no prior lifetime history of opioid use disorder.

So essentially, the people who reported to using more cannabis at the beginning of the study were more likely to show signs of opioid use disorder 3 years later.

But Does Connection Equal Causality?

One thing the authors do acknowledge outright is that the majority of adults who use cannabis do NOT start using or increase use of prescription opioids.

Another thing the researchers acknowledge is that their study isn’t proof that cannabis use causes opioid use. The association of marijuana use with non-medical prescription opioids after 3 years in no way means that marijuana use is proven to actually cause opioid use.

The researchers do have a few ideas though.

Some animal studies seem to have shown that it is possible for cannabis to lead to changes in the brain that make individuals more susceptible to opioid misuse.

Another argument is that there are several non-biological factors that can elevate the risk of opioid use. Those who regularly use marijuana may be more likely to interact with people who have access to opioids.

Many researchers have actually cautioned that there’s no solid evidence that marijuana use causes harder drug use.

In fact, a lot of experts and advocates argue that while marijuana use can easily correlate with harder drug use, so can alcohol and tobacco.

The first drugs many people ever use are alcohol or tobacco, which are both legal for adults and fairly easy to get. Yet, no one automatically assumes drinking or smoking cigarettes will lead to heroin use. However, if the same data and logic used by Olfson and his group were applied to alcohol and tobacco, we would probably see a huge correlation. So many advocates argue why should cannabis use be treated any different?

A 2002 report by RAND’s Drug Policy Research Center (DPRC) suggests that it is not marijuana use, but individuals’ opportunities and unique propensities to use drugs that determine their risk of initiating hard drugs. The Institute of Medicine came to a similar conclusion to the ‘gateway drug’ concept back in 1999.

So, no evidence thus far has been conclusive, only correlational.

There are also those out there that believe marijuana legalization would actually have the anti-gateway affect, meaning studies have suggested there is evidence that access to marijuana actually reduces some opioid use.

This growing body of investigation indicates that medical marijuana legalization, in particular, can lower the number of people misusing opioids. Some insist it is because cannabis can help to treat chronic pain instead of opioids. Others even think access to marijuana would cause people to substitute their alcohol use. However, research in this area is still finite. Now it’s far too early to tell if this would actually be an effective strategy.

There is even a new study from David Powell and Rosalie Pacula of the RAND Corporation and Mireille Jacobson of the University of California Irvine that examines how medical marijuana legalization- particularly in states with the most access- impacts opioid-related deaths. These researchers concluded,

“These findings suggest that broader access to medical marijuana facilitates substitution of marijuana for powerful and addictive opioids.”

What Can We Do?

Whichever side of this argument you’re on, there needs to be more time and energy put into exploring both perspectives. If the correlation between cannabis and opioids were ever proven to be more than meets the eye, then more needs to be done to make sure that legalization or decriminalization efforts co-exist with addiction treatment and support options.

If medical cannabis is found to be useful to help treat some who otherwise would be at elevated risk of chronic pain issues, opioid use disorder or even opioid-related death, then more should be done to make sure this method of treatment is safely studied and developed.

Either way, we must continue to work toward helping every individual suffering from substance use disorder of any kind. Whether it is marijuana use disorder or opioid use disorder, there should be safe and effective treatment options available.

There should always be resources available to help people who suffer from abuse. Supporting addiction recovery means breaking the stigma and offering holistic and effective solutions. Palm Healthcare Company is here to help. If you or someone you love is struggling, please call toll-free now.