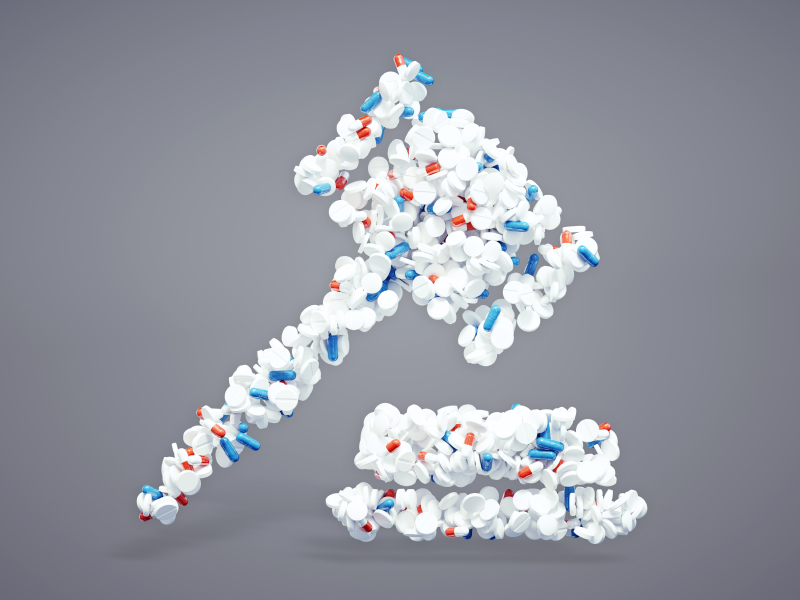 Big Pharma is getting a progressively sketchier and more unsavory reputation as the world opens its eyes to the desperation and deterioration created by the abuse of several powerful medications marketed to the masses in exponential amounts. The heaving heroin epidemic and its relationship with the over prescription of opiate painkillers and anti-depressants has caused a great deal of enormity and outrage, and more and more people are looking to politicians and lawmakers to hold the flame to the feet of Big Pharma for any and all misconduct.

Now according to a recent report, 2 California counties have filed suit against 5 of the biggest pharmaceutical companies in the business of pushing pills, and officials are referring to the misconduct as a “campaign of deception,” alleging the makers of various opiate based painkillers purposely lied about the effects and risks related to their drugs in order to increase profits, at great expense to human life and quality of their communities.

Tony Rackauckus is the Orange County District Attorney (DA), and he recently described his intention in pursuing legal action against this handful of pharmaceutical pushers as “a matter of public protection” and explained his efforts in following through with the suit is to act as an attempt “to stop the lies about what these drugs do.” In a recent story Rackauckus did not hold back his opinions of how these giants of the medication industry has been manipulating the population for profit, and told the Times,

“In order to put money in their pockets, they’ve done serious harm to many thousands of people,”

Orange County, along with Santa Clara County in California, has been battered and bewildered by sincreased overdose death and drastically increased medical costs credited to the escalation of abuse of prescription narcotics in the past few years, and Rackauckus is not the first to think the big names in Big Pharma should start being held accountable. Rackauckus stated:

“California is suffering disproportionately from this problem, so it is appropriate for this state to take up this hammer,”

That hammer is being swiftly taken up and swung at a number of drug companies, including those behind the production and marketing of OxyContin, which was recently approved by the FDA for children as young as 11 years old.

So while Big Pharma adjusts its strategies, states are gearing up to take the fight to their front door.

This entire mission to stand up for these counties and sue these companies could be a landmark marketing case, perhaps one only paralleled by the tobacco industry settlement back in the 1990’s. The lawsuit contends that five well-known drug companies knowingly violated California laws in numerous ways, including:

In labors to make a sweeping statement and target the big name offenders, which are:

The case being put together by the DA also claims these drug companies manipulated doctors into thinking that the benefits of an assortment of prescription drugs outweighed the risks, such as abuse leading to physical addiction. Those fighting for the county suggest these tactics lead many physicians across Southern California to prescribe drugs that led to fatal overdoses, which goes without even mentioning the contribution these drugs made to more serious illicit drug habits, as statistics have shown most heroin users today started with opiate painkillers at one point.

The case presented by Rackauckus stated:

“marketing – and not any medical breakthrough – that rationalized prescribing opioids for chronic pain and opened the floodgates of opioid use and abuse,” the suit said, they “deprived California patients and their doctors of the ability to make informed medical decisions and, instead, caused important, sometimes life-or-death decisions to be made based not on science, but on hype.”

Purdue Pharma has already been held up to scrutiny in the past few years by other states including Kentucky and Chicago in civil lawsuits aimed at the drug maker for the devastation caused by OxyContin and their questionable marketing strategies, and with cases like this coming up, one has to wonder if these pharmaceutical companies will ever truly have to face the music.

Sure they give up millions of dollars when they lose in court, but you can’t begin to put a price on the millions of lives lost over the years. They will just keep making money, maybe they should be dealt a different kind of justice for the damage they have created.

Soon we will see how this whole deal plays out, and if these 5 companies end up having to make some kind of retribution for medication marketing that have hurt a lot of people in the long run. Meanwhile people all over the country recover from addiction to opiates and other drugs with the help of strong support, and a great place to get the kind of support to take this kind of journey is Palm Partners. If you or someone you love is struggling with substance abuse or addiction, please call toll-free 1-800-951-6135